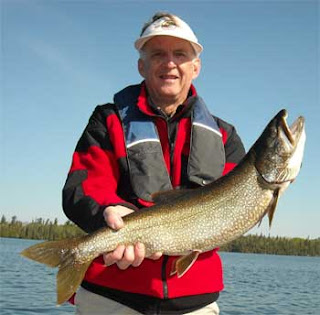 Hello from Fireside Lodge in Northwest Ontario, Canada. Opening week brought us fabulous unseasonable weather with temperatures between 72 to 82 degrees. Having a record early ice out, April 14th, and warmer than normal temperatures throughout the spring making us about 4 weeks ahead of last year. The White Suckers were in full spawning activity in the creek that runs through our property and by weeks end the Smallmouth started making beds for their yearly spawning ritual. To view some FABULOUS video of the spawning activities in our creek go to our Facebook or YouTube links at the bottom of this report or in the side column. 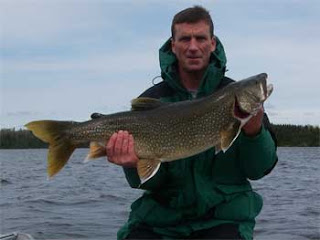 Frank Hazzard from Arlington, TX was again our first guest to start off the season at Fireside Lodge. This was Franks 20th consecutive year with a total of 27 trips to Fireside Lodge. Frank will be with us for several weeks so you will se him in the next few fishing reports. Within his first week Frank had Smallmouth Daily catches of 35, 62 with over 15% 17-inches or larger, 71 with most being between 13 and 16-inches, 30 and 31 with 33% in the 17-inch range. He also caught a number of Northern Pike and some Lakers, one being a MONSTER at 37-inches. One day while targeting Northern Pike Frank alone caught 31 with a dozen being over 30-inches, and a few in the 34 to 36-inch range. In addition to this fabulous fishing Frank had two terrific wildlife experiences seeing and eagle swoop down and nab a whitefish from the water and struggle to become air born with it’s catch. See this great video on our You Tube site at www.youtube.com/user/FiresideLodgeFish 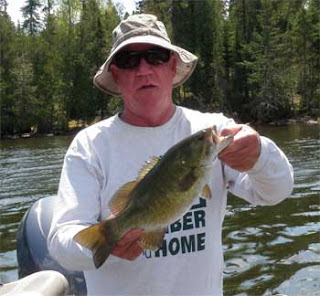 Dennis Brogan from Carol Stream, IL and good friend Joe Sisco from Cable, WI returned to Fireside Lodge for their 10th consecutive traditional fishing adventure to Fireside Lodge. Here primarily for the Smallmouth Bass and having only four days they did very well. After a slower start catching 15 on their first day, the second day was great as they landed 42 nice Smallmouth Bass. Third day they cau 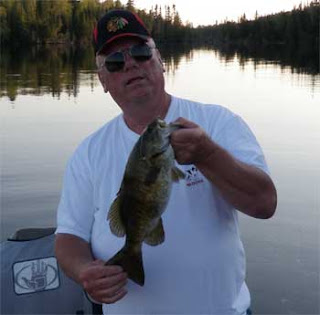 ght 36 with Dennis teaching us a new technique to catch the BIG Master Anglers Award Smallies. After flipping his crank bait perfectly over a tree branch where a BIG Smallmouth could not resist the dangling profile of Dennis’s lure, it struck with a violent explosion forcing Joe and Dennis to take their boat to the shallow shoreline to land the fish that was now half dangling from the tree branch. Too bad their third buddy, and partner in crime, Jeff Ziegler from Carol Stream, Illinois wasn’t with them this trip as he could have taken video of this new method of catching Trophy Smallmouth Bass to put on You Tube. On the fourth and final day these two caught over 40 Smallmouth Bass, with most being bigger, and Joe caught a Master Anglers Award 18.5-inch Smallie, and 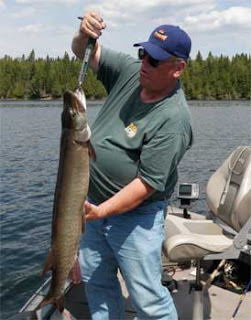 Dennis caught a BIG Muskie they never measured but did take a nice photo. Both left feeling the trip was too short and hope to return in 2011. 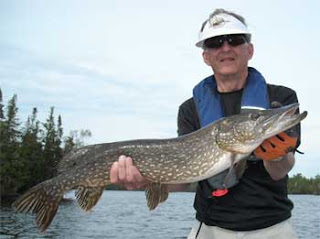 Bryan Neel III and good friend Tim Stewart both from Rochester, MN returned to Fireside Lodge for their 8th consecutive year and 12th fishing trip. Tops on their fishing menu is always Northern Pike and did they ever have action. One day after a fabulous day of catching 47 Northern Pike and several Lake Trout the action being so fierce that their hot lures, the X-Rap, got so torn up they had to by four more that evening after supper. Du 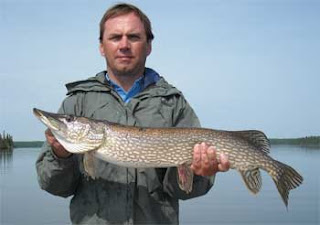 ring their stay they caught 114 Northern Pike with 20 between 30 to 36-inches, 30 Smallmouth Bass without even trying to fish for Smallmouth, and because the water was still cold the Lake Trout were still shallow and they ended up catching 19 of these special fish while fishing for Northern Pike, and many were over 30-inches and the largest was 36-icnhes. Great trip for these two and they hope to return this year in late August. 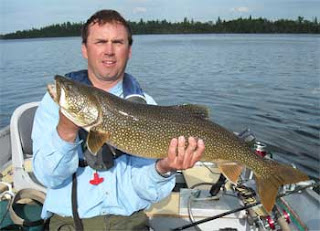 Tony Majcher from Hawthone Woods, IL, who has been a Fireside Lodge guest/friend since 1991 returned for opening week with his wife Judy for her second experience. Tony and Judy did not waste anytime finding fish as they landed 36 Smallmouth Bass and Judy caught a BIG 36-inch Northern Pike, being her personal best. Way to go Judy!!! Second day had these two catching 26 Smallmouth Bass and Tony caug 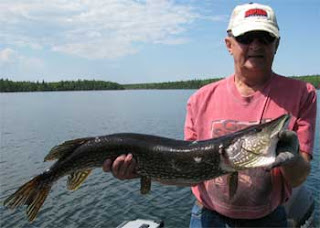 ht three 17.5-inch Smallmouth just missing the Master Anglers Award by a half inch three times. Tony also landed 4 nice Northern Pike. Third day was a bit slower as the Smallmouth seemed to be more interested in making nests for their annual spawning ritual which should take place in about 3-5 days. Instead of engulfing Tony’s sinking worm he would feel the Smallmouth just pick up the worm and move it away from the area and then drop it. This is very early for this happening as it usually takes place in the second week in June. Tony and Judy will still have three days of fishing left running into next week so you will read about them in next weeks report also. 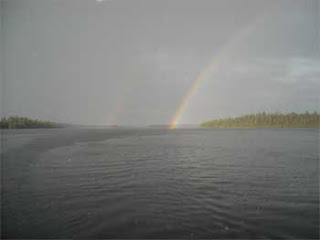 For More Information go to our websites at:

Posted by Alan Brandys/Fireside Lodge at 5:59 PM No comments: