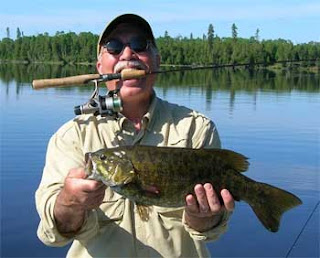 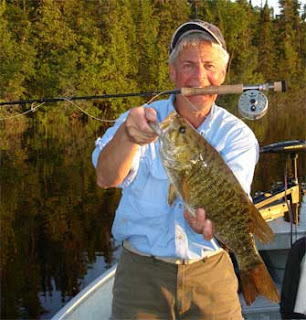 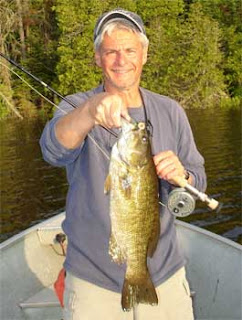 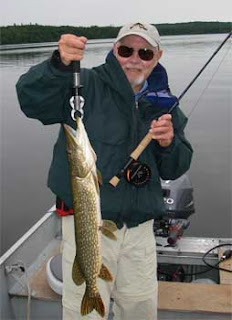 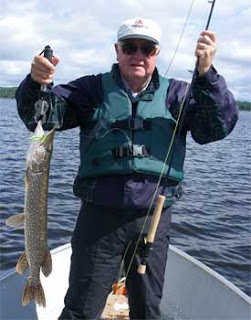 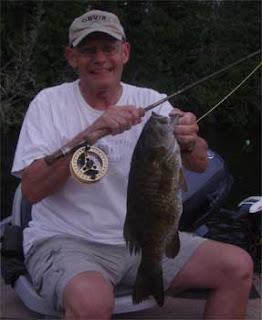 ival as he caught two Master Anglers Award Smallmouth while Fly Fishing, measuring 18 and 18.5-inches. They did well every day catching Smallmouth Bass. Mike caught all of his while Fly Fishing and Dee caught a few this way but most of her fish were caught using jigging techniques. Well, her techniques got her more than she bargained for, as she hooked and landed a HUGE 39.5-inch very heavy Northern Pike with no leader, 6lb test line, and a hair jig. WOW! What a catch by Dee. You have to look at this photo on our website below. Both had a great time enjoying the surroundings, the dinning room atmosphere at supper time, and the wildlife that flourishes in our area. They had such a great time they reserved their dates for next year before departing.
Posted by Alan Brandys/Fireside Lodge at 12:14 PM No comments:

What is a non-Canadian resident Outdoors Card?

A non-Canadian resident Outdoors Card is a plastic, wallet-sized card issued by the Ontario Ministry of Natural Resources and used for identification and administrative purposes.


Is a non-Canadian resident Outdoors Card a fishing licence?

No. For non-Canadian residents, a complete and valid licence to fish in Ontario consists of:

An Outdoors Card alone is NOT a fishing licence.


Who needs to purchase a non-Canadian resident Outdoors Card and fishing licence tag to fish in Ontario?

For non-resident groups of children (at least five people under the age of 18 years accompanied by a licenced adult) there is a special Licence for Members of an Organized Camp. This licence is available from Ministry of Natural Resources offices and ServiceOntario offices.


Where can I purchase a non-Canadian resident Outdoors Card and fishing licence tag?

Non-Canadian resident anglers may purchase a fishing licence that is effective immediately at more than 1,800 locations throughout the province. Licences are often available from tourist outfitters' camps and lodges, summer camps, and sporting goods stores or bait dealers. In smaller communities, they may be available at general stores or other retail establishments. A range of licences is offered to suit individual needs.

Non-Canadian resident fishing licences are also available through the mail by calling the Ontario Ministry of Natural Resources at 1-800-667-1940.


What should I do if my non-Canadian resident Outdoors Card is lost, stolen or destroyed?

If your non-Canadian resident Outdoors Card or any part of your licence is lost, stolen or destroyed, call the Outdoors Card Centre at 1-800-387-7011 to arrange for a replacement. In some circumstances there may be a replacement fee.


How can I get more information about the Outdoors Card?

The staff at the Ontario Ministry of Natural Resources' Outdoors Card Centre would be pleased to answer your questions.


What else should I know about my Outdoors Card?

Here are other important things to keep in mind:

US Passport Information and Requirements

There will be a new
requirement for United States citizens to produce
a passport when re-entering the United States,
effective June 1, 2009. We suggest that if you do
not already have one, apply for a passport now to
be sure not to get caught in a timely circumstance.

This information is the latest to date, Dec 30, 2008, found on the U.S. Department
of State website. http://travel.state.gov/travel/cbpmc/cbpmc_2223.html Please
check the mentioned websites to stay current with the information.
To avoid any question, apply for your passport now if you
do not have one.
LAND AND SEA TRAVEL
The following summarizes information available on the Department of Homeland Security’s
website. .
CURRENTLY: U.S. citizens need to present either (a) a passport, passport card*
(scheduled to be in full production beginning in July 2008), or WHTI-compliant document;
or (b) a government-issued photo ID, such as a driver's license, along with proof of
citizenship, such as a birth certificate.
LATER: On June 1, 2009, the U.S. government will implement the full requirements of
the land and sea phase of WHTI. The proposed rules require most U.S. citizens entering
the United States at sea or land ports of entry to have a passport, passport card, or WHTI-
compliant document.
CHILDREN: U.S. citizen children under the age of 16 will be able to present the original or
copy of their birth certificate, or other proof of citizenship such as a naturalization
certificate or citizenship card. Groups of U.S. citizen children ages 16 through 18, when
traveling with a school or religious group, social organization, or sports team, will be able
to enter under adult supervision with originals or copies of their birth certificates or other
proof of citizenship.

*U.S. citizens can also apply for a U.S. Passport Card, which facilitates entry and expedites
document processing at U.S. land and sea ports-of-entry when arriving from Canada,
Mexico, the Caribbean and Bermuda. The card may not be used to travel by air. Otherwise,
it carries the rights and privileges of the U.S. passport book and is adjudicated to the exact
same standards.


AIR TRAVEL
All persons traveling by air outside of the United States are required to present a
passport or other valid travel document to enter or re-enter the United States.
Posted by Alan Brandys/Fireside Lodge at 2:39 PM No comments: