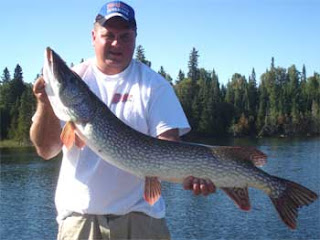 Hello from Fireside Lodge in Northwest Ontario, Canada. During the last open week of the 2011-fishing season we were blessed with wonderful weather and many beautiful orange vibrant sunsets. 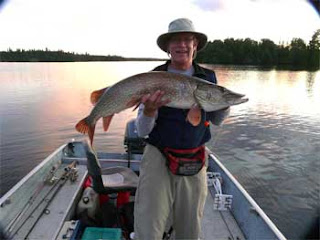 Long time guests Paul Letourneau from Northville, MN & Spencer Olson from MN. upon arrival were very excited and Paul stated his goal for this trip was to catch a 40” or better Northern Pike. 1st day was fabulous as they caught about 20 Pike, 10 over 27” and Paul landed a BIG 37”er with a huge head & body. 2nd day was a great day as they caught 32 Northern Pike & Paul accomplished his goal of catching a Trophy Northern Pike measuring 41”. Congrats to Paul. 3rd day was 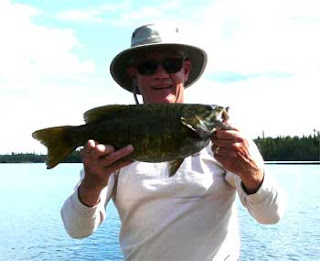 very sunny & calm, which they felt affected the fishing, however they did catch some Smallmouth Bass & Paul caught an 18.5” Master Anglers Trophy Smallmouth. This means if Paul catches a Trophy Musky in his last 2 days he would be the first to catch Master Anglers Award fish of all three species. They also had fabulous Pike fishing for a few hours after supper catching 6 Pike between 28 and 39” with Spencer landing two Northern Pike with enormous girth measuring 38 & 39”. 4th day was a bit slower as they experimented with open water trolling around schools of baitfish. 5th & final day had them catch more Pike ending up with a nice 36”er and a gorgeous Canadian sunset to boot. See some of their catches posted by Paul on our Face Book Page. 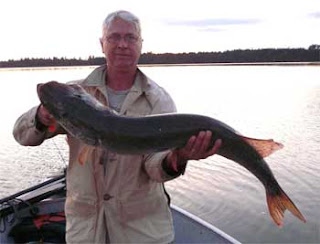 Father & Son Rich & Brian Jicha from Avon Lake, OH & Middleton, WI returned for their 6th time. DOA the got right to it catching over 15 Pike in just 3.5 hours before supper. Afterwards they landed about 5 more fish including a few Smallmouth Bass. First day was all about Pike catching a bunch, over 40, & Rich landed a Huge 37”er. 2nd & 3rd days they had a ball catching many Northern Pike & a few Smallmouth Bass. On 1 of these days alone they landed 60+ Pike, and Brian caught a Big Smallmouth he regrets not measuring as it might have been a Master Anglers Award fish. 4th day was a portage for Musky having loads of follows even on Smallmouth, on a perfect cloud cover day with rain approaching. Rich said it seemed as if they were in a Muskie aquarium. They left at about 2:30 catching about 9 nice Northern Pike before supper with Brian landing a nice 36”er. 5th day fishing between t-storms & dealing with some high winds managed to catch 24 Northern Pike. Another fabulous highlight was seeing a moose swim across the lake and surge out of the water onto an island while they were fishing. They had another fabulous stay with us and made another set of fishing memories together. 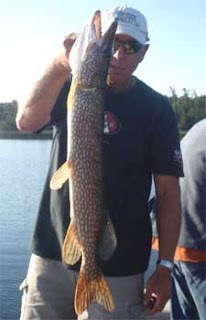 Bob & Jane Babcock from Midland, MI were back fishing with us for their 13th consecutive year. DOA & first day they caught some nice Pike and Bob had a Huge Musky follow on a surface lure. Day 2&3 they had similar days catching some Northern Pike in search of that large trophy fish using many presentations & lures. Bob seemed to keep getting big follows but could not get a hook up. One time he had a HUGE Musky follow his surface bait, but was handcuffed not being able to figure 8 the fish. That’s typical Musky fishing. On their 4th day they sized down a bit a caught a bunch of Pike of average size, but Bob again had a huge fish follow on a new suspending lure, not once but twice about three feet back and several feet below the lure. The big story today was the Moose they observed. While fishing they we able to spot a Moose sauntering along a shoreline. Always a GREAT sight to see and one of the many untold benefits of fishing in our wonderful wilderness area. Fifth & final day Bob & Jane again caught some nice fish, & while fishing a new area with a new presentation Bob had a Giant Musky come up on his lure. Both soaked up every last minute of our great wilderness setting. They even broke tradition, which is staying in their last night enjoying the wilderness view from their deck, and enjoyed their last evening doing the same from their boat on the lake. Before departing Bob & Jane made their reservations for the same week in 2012.

The Ruyter family of Anthony, Elizabeth, & Michael from Pembroke, Ontario were visiting us at Fireside Lodgefor their first time. The main purpose of this family’s trip was to catch up with their lives as Michael had spent the summer working in a mining camp in the Yukon, 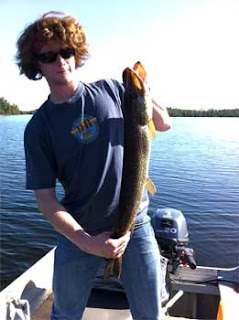 and was on his way to attend University in Thunder Bay, Ontario. Michael flew to Thunder Bay from the Yukon while Elizabeth & Tony drove from Pembroke, ON to pick him up from the airport to spend 8 nights & 7 days at Fireside Lodge for a special family visit. First time ever fishing with us had Tony & Mike getting plenty of action hooking up 9-10 fish & landing several. Tony also had a big fish rip his line out and break off. Mike also landed his biggest Northern Pike at 35”. This family had a blast all week enjoying the wonderful fishing & wilderness atmosphere we have to offer. They had endless conversation in the dinning room at breakfast & supper times, enjoyed a terrific shore-lunch on the lake, and also spent some memorable time at Twin Falls. 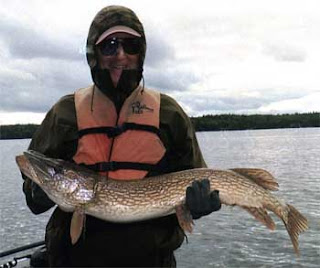 Tyler Tennant from League City, TX and father-in-law Peter Higman from Libertyville, IL were back for their 6th consecutive year. 1st day was “FABULOU 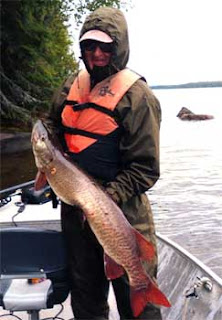 S” as they caught many Smallmouth Bass & Peter landed two very BIG fish. The 1st being a 39”Northern Pike and the 2nd was a GIANT 43” Muskie. WOW!!! 2nd day was slower catching some fish while investigation new territory. 3rd day had them catching mostly Smallmouth Bass while seeing a few very big fish follow their lure right to the boat. 4th day while fishing for Musky they had some big follows & landed 3 smaller Muskie, & Tyler caught an 18.5” Master Anglers Award Smallmouth Bass. They spent their final two days catching plenty of Smallmouth Bass and Northern Pike with Tyler landing another Master Anglers Award Smallie at 18.5”, and he had two exciting blow ups on a surface lure by Musky. Both had a great trip and hope to return again. 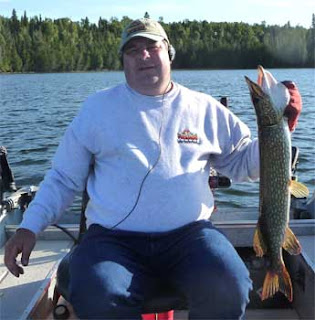 Jersey City, NJ returned for their third consecutive year. First day was a very good Northern Pike catching day landing a lot between 25 to 30” and Carrie had the fish of the day with a 32.5”er that gave her a very good fight. 2nd day was a portage for Musky where they had many follows but no takers. 3rd day had John catching over 20 Pike himself up to 31” and several Smallmouth Bass up to 17.5”. The rest of their stay was very enjoyable having great weather and making many memories together while thoroughly enjoying their valuable vacation time. They had such a great time the ended up making reservations with us for 2012 before departing. 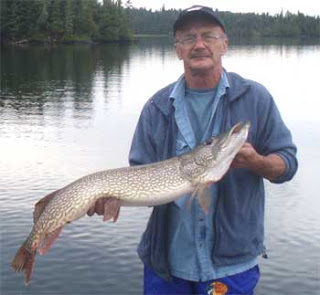 Returning for their 8th year were Charlie Geinosky from Burbank, IL with father and son Bob and Jon Reinhardt from Orland Park and Aurora, IL. DOA, in just 3 hours before supper, they caught 19 Northern Pike with Charlie setting the pace landing a 39.25” Northern Pike. 1st full day they caught 22 fish, 1 Smallmouth & 21 North 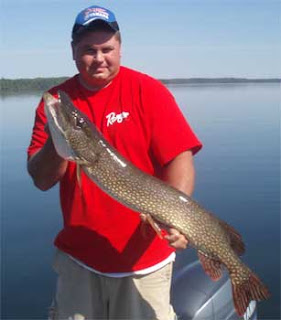 ern Pike & Jon caught a big 36” Pike. 2nd day had them catching fish & Jon landed two Muskie while missing another very big Musky estimated in the mid-40” range. You could tell on Jon’s face that this one hurt almost as much as the one he lost 3 years ago estimated at close to 50”. 3rd day had them catching well over 20 Northern Pike along with some Smallmouth Bass. 4th day however was Jon’s “BIG” fish day as he landed a GIANT 43.5” Northern Pike along with a 37”er. The last two days they had great fishing catching many Northern Pike, seeing countless big follows from Pike & Musky, Charlie catching a 36’er and Jon caught a 37.5” and another very BIG 39.75” Northern Pike. 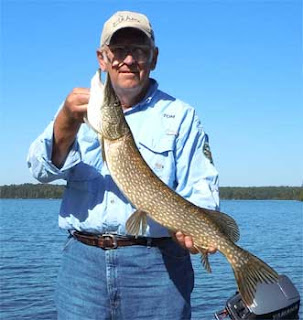 Father and son Jim & Bryan O’Toole from IL returned to Fireside Lodge along with brother/sister combo Leah Bezin & Tom Nayder from Berwyn & Orland Park, IL. returning for their second trip in 4 weeks. Here for three days of fishing all took full advantage of their limited time spending most daylight hours on the water. They had a fabulous trip catching a lot of 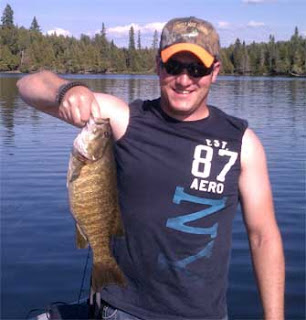 Northern Pike & Smallmouth Bass, having many laughs, and making special memories between family & friends. Fishing highlights were catching a lot of Pike between 30-35”, Jim landing a Tiger Musky, & Bryan catching an 18.5” Master Anglers Award Smallmouth Bass. A very special bonus for all this week was having Leah & Tom entertain us in the evening with their musical talents playing guitar & banjo to some familiar & not so familiar sing-a-long type tunes. Special thanks to them both. This was a very special trip for Jim & Bryan. Being guests and making father/son memories at Fireside Lodge since Bryan was in high school, he is now in his mid-20’s & recently joined the US Air Force & will be departing for basic training a few days after returning home. A lasting memory for Audrey & I was watching them have their 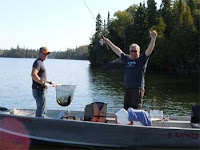 traditional cigar at the end of the dock upon arrival & again just before departing. We wish Bryan the best & pray for his safety in his very noble & honorable serving in the United Sates Air Force. 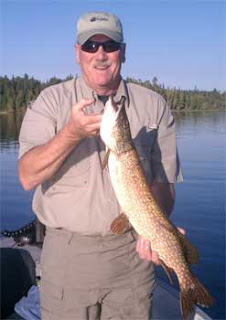 Make sure to go to our website listed below to see the 2011/2010 Photos. For Fabulous Video, Wildlife Events, and Current Happenings go to our Social Sites Below. 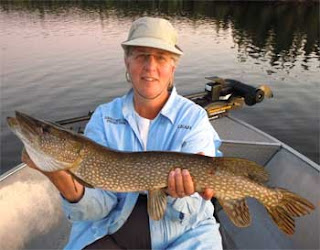 This fishing report brings our 22nd year at Fireside Lodge to a close. It is very hard for Audrey & I to comprehend that 22 years have gone by since we initially started our adventure at Fireside Lodge. The day we first looked at Fireside Lodge it has been & always will be a very special place for us. Throughout the 22 years we hope by introducing Fireside Lodge to others it has become a special place to them, and given them some of the enjoyment & memories that we have experienced. It is the guests that make Fireside Lodge come to life and create a wonderful atmosphere for all to enjoy, and for that we thank you all. We also thank you all for helping Audrey and I continue our adventure and pursue our passion in life. With that said I bring our 2011 fishing season to a close. Throughout the fall, winter, & early spring we will be sending out a few announcements, and also look for regular postings to our Face Book, You Tube, and Twitter sites. Thank you all for your support over the years, Sincerely, Audrey & Alan

Posted by Alan Brandys/Fireside Lodge at 6:00 AM No comments: