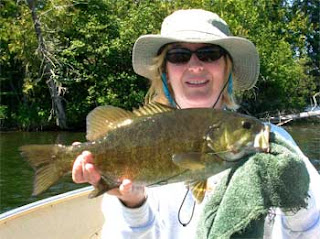 This week can be described in one word “WINDY”. After having some temperatures in the mid 70’s, we had another rainy cold front move in and stayed with us for four days. The winds were a challenge for 5 out of the 7 days and all guests had to change fishing techniques.
Fishing at Fireside Lodge for their first time were good friends Joshua Lauth, Tom Lak 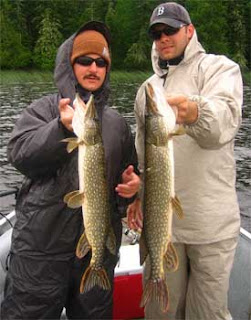 e from Brunswick, OH and Tom Ozog from Strongsville, OH. First two days their total was 13 Northern Pike caught. Thirteen must have been lucky for these three as the next days catches dramatically increased. They had daily catches of 37, 42, and 55 Northern Pike on their last three days, and also Tom Ozog caught his first ever Muskie. These three had a great time as they spent most of their waking hours on he water, despite having rough water on thee of their five days. Now these three can believe my fishing reports because they are in this one. When making reservations with us t hey were wondering if the catches I write about were true, so after a few references they decided to fish at Fireside Lodge, to make the stories I write about a reality for them, and they did just that.

First time ever fishing at Fireside Lodge were David Powell, and Warren Farrar from Springfield and Bloomington, IL, James Stark from Mission Viejo, C A, and Steven Wentz from Flowery Branch, GA. First day was a learning experience and they caught a few Northern Pike. Next day the caught more Pike and had some follows, as they became more familiar with other areas of Little Vermilion Lake. Fourth day was a very good day as they caught many more Pike and Jim landed a 35-inch Northern Pike and Warren caught his first Muskie ever, a stout 35.5-inch wide body Muskie. Congratulations to Warren for catching his first Muskie. Last day brought severe storm conditions with high winds, which made it very difficult to fish anywhere. They caught a fe w but gave it up around 2:00 PM. Sadly this was their final day but all said they had a wonderful stay with us at Fireside Lodge.

Jerry and Wanda Miller from Erwin, TN were returning to Fireside Lodge for their fifteenth year. First day was very windy limiting their fishing locations but they manage 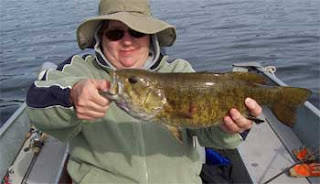 d to have a great day catching 16 Smallmouth Bass and 9 Northern Pike. Second day was fabulous as they caught over 40 very nice Smallmouth Bass with Wanda catching three Master Anglers Award Smallies. Jerry caught most of his on top-water and Wanda with leeches. Jerry also had some fun with Northern Pike on top. Third day was full of Smallmouth action, again catching well over 40, with almost all being 15 to 17.5-inches. Their pictures tell the story showing Wanda and Jerry holding many BIG Smallmouth. Fourth day, fighting very high winds and heavy rain, they managed to catch 23 Smallmouth before noon and called it a day. Again most were 15 to 18-inches. Fifth day the weather got worse, if that is p 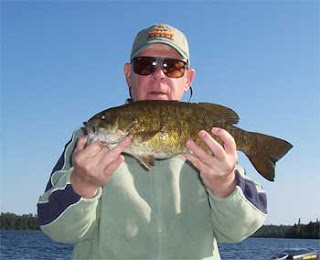 ossible. The morning brought 49 degrees, rains and strong cold winds. Jerry and Wanda took a pass on this day and enjoyed the comforts of our deluxe cabin accommodations with a terrific view of the lake, and relaxed reading and enjoying quiet time. Sixth and final day was a planned half day fishing of which they started in rainy cool weather, and caught 16 beautiful Smallmouth 15 to 18-inches and 10 Northern Pike. Almost a ca rbon copy of their first day. Both thoroughly enjoyed their time at Fireside Lodge and reserved their dates for 2010.

Jack and Steven Starnes from Wise and Duffield, VA were back fishing at Fireside Lodge for their fifth consecutive year. Day of arrival Jack and Steve caught 40 Smallmouth Bass 11 Northern Pike and each caught a 40-inch Master Anglers Award Pike. First full day 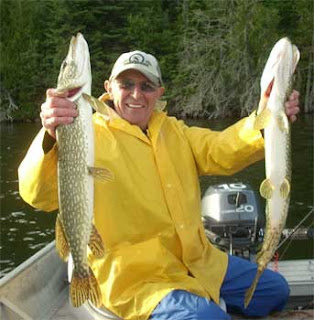 was excellent as they caught 60-70 Smallmouth Bass, a lot being 15-inches or better, and 25 Northern Pike with 4 being over 34-inches. That same evening Jac k lost a nice Tiger Muskie in the high 30-inch range and Steven caught a 39-inch Muskie. WOW!! Second day was all Smallmouth Bass all day long, saying their numbers were well over 100, with half being 15-inches or better. Third day had these two catching over 50 Smallmouth Bass, and they landed two Muskie 32 to 35-inches, caught a huge 37-inch Northern Pike, and had two 40-inch Plus Muskie up to the boat where one broke off and the other one shook a hook. Fourth day they portaged with very high winds and heavy rain but still caught 25 smaller Northern Pike and 6 very nice Walleye. Fifth day a was a cold, windy, and rainy day of the worst kind, but these two still managed 20 nice Smallmouth Bass and one Muskie. Sixth and final day they finished with 30 Smallmouth Bass and three Mu skie. In recapping their trip at suppertime they both sounded sad to leave, however they did make their reservations for the same week in 2010.

Fran and Colleen Stack from Lorain, OH returned to Fireside Lodge for their seve 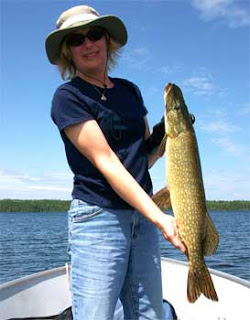 nth year. First day they portaged fishing for Muskie and had a few follows and caught some Smallmouth Bass. As Colleen said a suppertime, they had a great day. Second day they caught 36 Northern Pike and Fran landed a Tiger Muskie. Third day they found themselves into a bunch of nice large Northern Pike in the 30-inch range, and Colleen came up with the catch of the day landing a large 35-inch Pike. Fourth day was extreme winds with heavy rain, but as usual they fished with slimes on their faces and it sure paid off. They caught some nice Northern Pike, and it was Fran’s turn to catch the big fish of the day as he landed a 39-inch Northern pike with enormous girth. Despite their fifth and final day being a cold rainy day with high winds, Fran and Colleen were off and on their way fishing by 6:00 AM. Fishing in this weather until about 2:30PM, when they packed it in being soaked through and through and very cold. However their efforts paid off as they caught 65 Northern pike and two Smallmouth Bass in this short time period. Both left as the came, with smiling faces, and were already planning for next years trip. 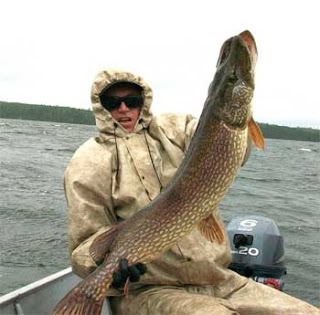 Returning for their fifth fishing trip to Fireside Lodge were father and Son Richard and Brian Jicha from Avon Lake, Oh and Madison, WI. First day was very exciting as they caught over 40 Northern Pike and lost over 40 while fishing with surf ace buzz baits. It was loads of fun watching these Pike rockets explode out of the water. Second day the fishing was good, but the catching a challenge, as they had a lot of follows, landing a few Pike and saw some really BIG Muskie in areas they never fished before. Third day was a very wet and windy portage lake day. They caught well over 20 Northern pike and had a ball doing so. Fourth day was a portage lake to fish for Muskie and Smallmouth but the winds were so bad that they could hardly hold position anywhere on the smaller lake which had no break lines to slow the wind down. They bailed out about noon to Little Vermilion Lake and did well catching Northern Pike in the 30-inch range. Fifth day was fabulous for Rick and Brian as they caught 86 Northern Pike and were eating supper in our dining room at 6:30PM. WOW what great action and fun. Sixth and final day was a great finish as t hey caught 42 Northern Pike. Both had a blast together, made another set of Fireside Lodge fishing memories, and seemed sad to leave.

Father and daughter Donald and Lauren Holman from C hicago, IL and Father-in-law and grandpa Peter Krebs from Niles, IL were fishing at Fireside Lodge for their first time. First full day fishing they did fantastic catching 50 to 60 Northern Pike by suppertime, and then the weather came in so they called it a day. Second day we had a huge storm roll in with heavy rain and very high winds. They attempted to go fishing a few times and returned to the dock within a short time period. Finally Don fished for a few hours by himself, caught a Pike got a few follows, and saw a huge over 40-iinch Muskie follow his lure but not thinking pulled his lur 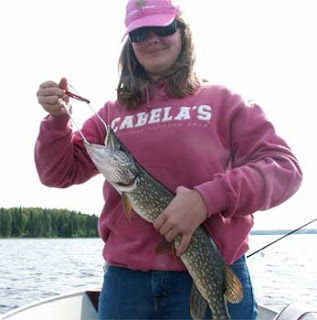 e out of the water too soon. Third day was very cold and rainy with high winds, which found them with very little fishing tim e. They made the best of the day, by visiting Sioux Lookout, building an Inunshuck on our road, having an afternoon nap, and playing the board game Sorry. Don went out alone for about 2.5 hours and had a ball catching a few fish Fourth and final day was much better with light rain and drizzle and the winds were calm. They finished with a bang as they caught over 50 Northern Pike and 6 Smallmouth Bass. In Lauren’s words it was an awesome day, and I think Don has a fishing partner for life, as Lauren was already talkin g about next year. Many wonderful memories were made at Fireside Lodge between father, daughter, and grandpa and we thank them for choosing fireside lodge to create this special time and memories together.

Dave Minson and his sons Jonathan, 11, and Stephan, 12, from Burlington, Ontario were fishing at Fireside Lodge for there first time. On their day of arrival they caught a few Northern Pike and Jonathan had a huge Pike on and up to the boat. After the fish looked Jonathan in the eyes it took a strong run under the bo 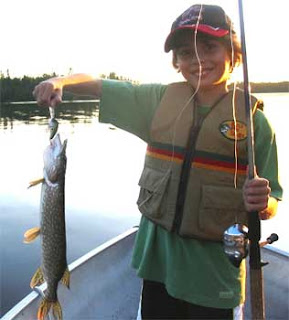 at and broke the line. Their first full day was very exciting as they took a long ride through a creek to another lake and h ooked a bunch of Northern Pike, landing a total of nine. Second day was very high winds with rain storms all day long, and Dave and his two boys still spent 5 hours fishing, and had success catching one Pike which was an accomplishment in the adverse weather conditions. Third day was a windy cold rainy day but Dave and his boys left the dock after breakfast to brave nature’s elements. They fished their hearts out and caught some Northern Pike and enjoyed the whole experience. Stephen and Jonathan were the talk of the lodge with their smiles and big eyes, and they were very polite and had very good table m anors. Also, Jonathan draws very well, and he made a drawing of a Muskie swimming though a weed bed on a table napkin and presented it to Audrey and I. These three left making many father and son memories together, which is the biggest, catch of all at Fireside Lodge. Thanks for choosing Fireside Lodge to be part of your memory log. 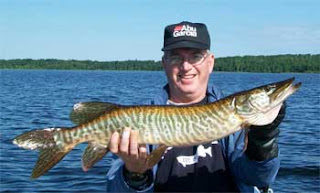 Posted by Alan Brandys/Fireside Lodge at 7:54 AM