Hello from Fireside Lodge in Northwest Ontario
This was an on again and off again week weather wise as we had a nice day in the low 70’s, a cool rainy day after some thunderstorms, then a beautiful sunny day in the mid-70’s, followed by another cold front with rain, followed by two very nice sunny days. That’s weather for ya. 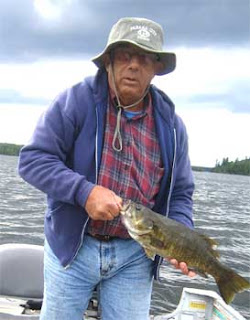 Albert(Bert)Zimbrich, Dale Clement both from Knoxville, TN, Jacob (Bud) Zeigler from Washington, DC, and Joe Gabbard from Sterling, VA were fishing at Fireside Lodge for their first time. Bert, Joe, and Dale during a few hours before supper, on their day of arrival, caught 7 Northern Pike and a Smallmouth Bass. First full day fishing this group said they caug 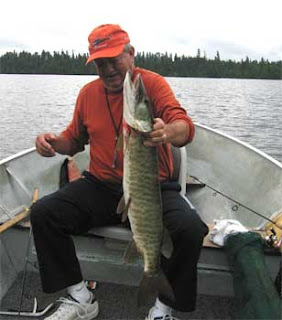 ht plenty of Smallmouth Bass and Northern Pike and both Bert and Joe caught a 30-inch plus Muskie. Second day was fabulous fishing as they all caught over 100 Northern Pike, Bert landed two Master Anglers Award Smallmouth Bass and Dale caught one all being 18.5-inches. The day was so good that at times Pike were charging out of the water after lures being lifted out of the water at the end of a retrieve. Third day was very windy with rain on a off which made for tough conditions, but they still caught some Pike up to 33-inches. Fourth day was a fabulous and fun day as Bert and Dale had what seemed to be endless action landing 60-plus Northern Pike, and Bud and Joe caught 30 Northern Pike and 18 Smallmouth Bass. The Smallmouth were special in that 12 of them were 17-inches or larger, and Bud landed two Master Anglers Award Smallmouth one being a GIANT 19.5-inches an 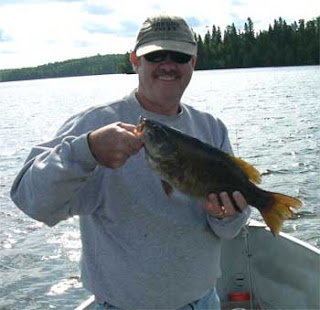 d the other was a very girthy 18.5-inches. It was Bud’s last day so he finished in glory and fame. On the fifth day the remaining three were met with a North Eastern cold front and heavy rain which brought them back to the dock well before noon and spent the rest of the day in the warm dry cabin. Fish caught were at a minimum as the lake conditions were severe, and temps reached only a high of 59 degrees. Sixth day had these three having a beautiful last day and Joe started off on his very first cast catching an 18.5-inch Master Anglers Award Smallmouth Bass. That means all of the group caught a Master Anglers Award Smallmouth on their first fishing trip at Fireside Lodge. They also had some good morning action on Northern Pike wit Joe and Dale catching over 20, however they forgot their lunch back at the cabin and had to come back which broke their momentum. All had a great time fishing with friends and making memories and both Joe and Dale were talking about bringing their sons or grandsons back next time. 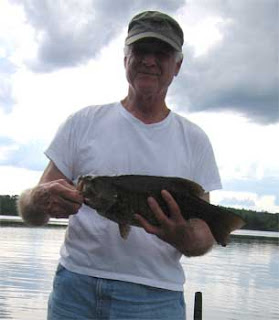 Here by referral were Jim Joyce from Fairgrove, MO, David Kroeger from Omaha, NE, and Steve Tegler from Lincoln, NE. Day of arrival these three got right to it and caught over 20 fish, a combination of Smallmouth Bass and Northern Pike. First full day of fishing they did fantastic catching about 60 Smallmouth Bass and 10 Northern Pike. That’s a 70 fish day. Dave caught two Master Anglers Award Smallmouth and Steve had one all being 18.5-inches. Pink Senko worms was their magic bait for the day. Second day was also a great fishing day with a differen 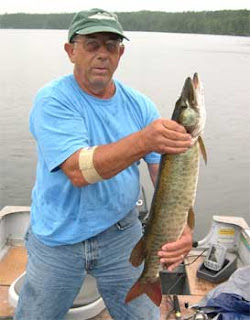 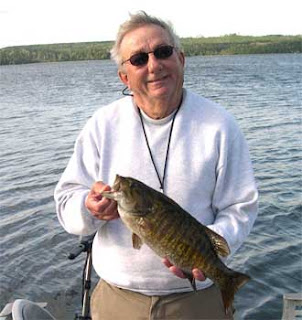 Returning to Fireside Lodge for his second time was Tom Strachen with sons Ryan and Ross and son-in-law Tom Stenger from Akron, Oh, Carrboro, NC, Columbus, Oh, and Copley, OH. First day was great as all caught some nice Northern Pike and Smallmouth Bass with Tom Stachen landing the largest Smallmouth at 17.5-inches, and Ryan, Ross, and Tom Stenger all caught Pike in the 30-inch plus range. Second day was a gangbusters Pike day as they caught over 60 Northern Pike between them, and had lots of other action with lost fish and follows. Third day had Tom Strachen and Ryan catching mostly Northern Pike and one 15-inch Smallmouth, while Ross and Tom Stenger had a fabulous day as they found a secret bait in orange twister tails 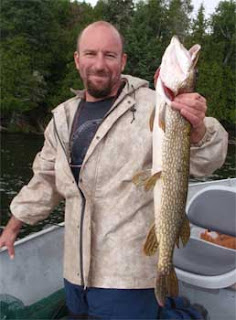 . Yes, that’s right I did say orange. They ended up catching over 40 Northern Pike and had such a blast they lost track of time and missed supper in the dinning room. They did not miss supper itself as we packed their meals and had them waiting in their cabin for them. Fourth an final day was another great day fishing and catching as Tom and Tom Teamed up for about 18 Northern Pike, and brothers Rya 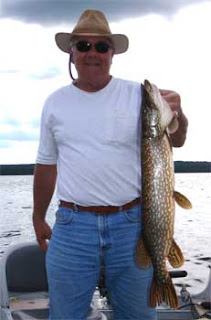 n and Ross caught well over 30 and landed a lot of larger fish. All had a wonderful family fishing trip making memories together and talk of coming back next year with more family was the topic of discussion before departing.

Returning to Fireside Lodge after 20-years were father Gary Nichols from Naperville, IL and his son Mark from Seattle, Washington. First day they were met with cold front conditions, high winds, and showers. It took a little while but they started catching fish landing some Smallmouth Bass and Northern Pike in the 28 to 32-inch range. Second day was great as they caught over 30 Northern Pike. Third day had these two out after the noon hour choosing to wait for the weather to clam down a bit. In four hours they caught both Northern Pike and a few nice Smallmouth despite the severe cold front conditions with high winds and rain. Fourth and final day was a great day as they caught a lot of fish being a combination of Northern Pike and Smallmouth Bass, with Mark catching some of his best Smallmouth ever. Both had a terrific time making memories together and wished stay another day. 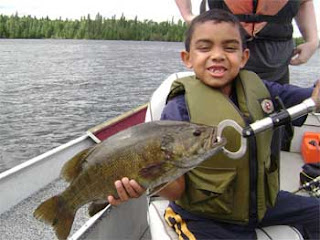 Walt LaCasse from Minnetonka, MN who has been coming to Fireside Lodge every year since 1996, and twice a year for the last seven years was returning for his second trip this year with his daughter Alyssa and his 7-year old grandson Keeghan. On their day of arrival before supper after fishing just a few hours they all caught fish and some BIG fish. On Keeghan’s third cast he hooked and landed an 18-inch bulging Master Anglers Award Smallmouth Bass. WOW!!! 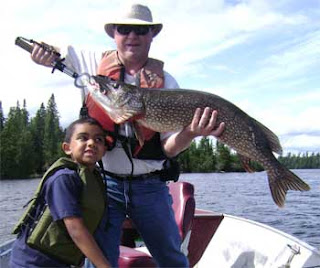 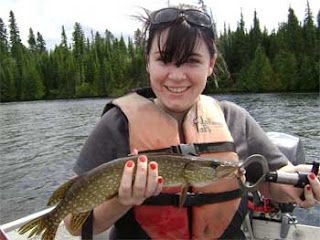 em a cold front with on and off rain and wind. Even with these conditions Keeghan stayed out all day long with Alyssa and Grandpa. Keeghan caught three Northern Pike and Walt caught a BIG FAT 35-inch Northern Pike. That evening Keegan wanted to go fishing again, so they did for an hour and caught three more Pike. Second day was a super day for these three as the caught 40 plus Northern Pike and Walt caught a 19.5-inch and an 18.5-inch Master Anglers Award Smallmouth. Both Alyssa and Keeghan caught a lot of Northern Pike. A funny story is when Walt was reeling in a Pike in the high 20-inch range, as Keeghan saw it he said “Grandpa your fish is a smaller one”. I guest that’s what anyone would think if the first Northern Pike you ever saw in your life was a 40-inch Monster, that would qualify for most fishers Pike of a lifetime. Third day they woke up to a North Eastern cold front with a lot of rain. An attempt go fishing was made mid-morning but they returned as quick as the heavy rain did. Not fishing again until after supper, when all three went out for their last fish for the trip, they caught some nice Northern Pike and enjoyed their last look at the beautiful surroundings we are located in at Fireside Lodge. All departed very happy with wonderful memories made between three generations, and before leaving Walt reserved his second set of dates for 2010. Thanks for choosing Fireside Lodge to make you memories with family and friends. 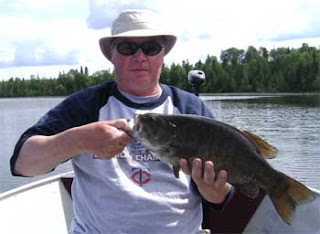 Father and son Mike and Andy Pritzl from Caledonia and Racine WI. Returned to Fireside Lodge for their fifth trip. They showed up with smiles and ready to go despite the rainy cold front conditions. Before supper these two, in just a few hours caught 10 Northern Pike and after supper they caught 2 Smallmouth Bass, 3 more Pike up to 31-inches and Andy had a Musky on estimated at 35-inches, but the big fish popped its head out of the water and spit Andy’s lure back at him. First full day of fishing was fabulous weather and terrific fishing, Andy catching 40 and Mike 39-Northern Pike for a total of 79 before supper. They also caught 7 Smallmout 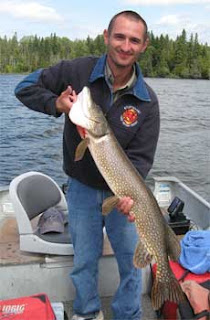 h two at 15-inches, one 17, one 17.5, and Andy caught a GIANT 19.5-inch Master Anglers Award Smallmouth. In the evening they caught three more Northern Pike and Andy landed a 34-inch Tiger Musky. Second day they did well catching 8 Northern Pike most being 28 to 31-inches and a Smallmouth Bass. In the evening they had fun surface fishing with poppers having some strikes and Mike caught a nice Smallmouth. Third and final day turned into another Pike day as they caught 26 Pike with most being the range of 28 to 37.5-inches with Andy catching the 37.5-incher, his personal best. They also caught 6 Smallmouth Bass. Both had a blast and made another set of father and son memories at Fireside Lodge.
Make sure to go to our website listed below to see the 2009 Photos

Posted by Alan Brandys/Fireside Lodge at 4:18 AM