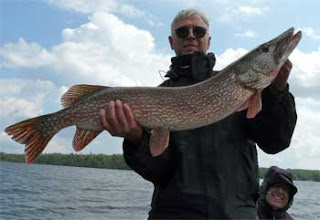 Hello From Fireside Lodge in Northwest, Ontario, Canada. At this time of year the weather can do anything however having a few cool days and a few in the 80’s made for a typical fishing week for later August. 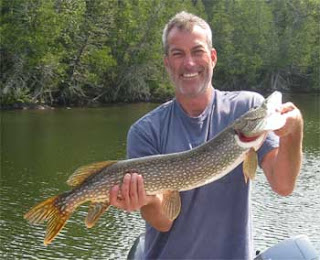 returned to Fireside Lodge with Lee Lora also from Medina and Jeff Con from Cuyahoga, OH. First day fishing they had a slow morning however in the afternoon the fish turned on, catching many Northern Pike and one 17.5-inch Smallmouth Bass. Second day was excellent saying it was their best day ever catching Northern Pike, and the magic lure was a #5, Silver Blade with Blue Bell, Blue Fox Spinner. Third day was much 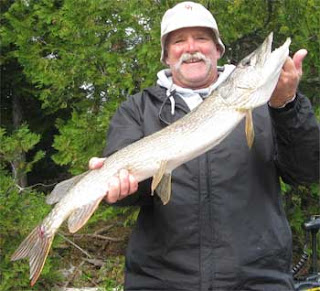 slower but they still managed a half dozen nice Pike. Forth day was blustery with strong, over 40mph, winds however Steve said they did manage to catch their fair share of fish. Fifth & final day was a short day because all decided to get on road for the trip home by mid afternoon, but Jeff and Steven caught a half dozen nice Pike, with Jeff catching his largest measuring 35-inches. All had a great trip and were already talking about their return. 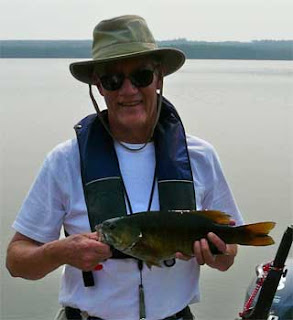 ilson for his second visit, were back to explore our waters on Little Vermilion Lake system. These three got off to a great start catching a bunch of Pike, and Paul landed a BIG 17.5-inch Smallmouth Bass. The second day they found themselves portaging to another lake with to fish for Walleye & Northern Pike, and the Pike were very agreeable catching them all day long. Things were so good that Link tried lures he never imagined fishing with for Pike and still caught fish. Third day was very slow just having a few follows. Fourth day was very high winds gusting to over 40mph, but they did great catching Northern Pike, and BIG ones at that, with Spencer being the Master of Anglers in this boat catching a 28, 30, 32, 35, 39, and 42-inch Trophy Northern Pike. WOW What a fabulous day for Spencer, Paul, and Link. Fifth day they had a fabulous day portaging to one of our four out lakes catching 37 Northern Pike. Sixth and final day was terrific weather day as they caught some nice fish, and 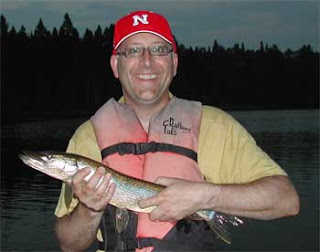 while enjoying their last breakfast they were all sad wondering how the week went by so fast. Good thing there is always next years trip to plan for, and as Paul left he said, “See You Next Year”.

Returning for their 11th fishing trip to Fireside Lodge in as many years were Ed Burns from College Station, TX and Todd Smith from McKinney, TX. After spending most of their first morning fishless except for one nice Smallmouth Todd found the Northern Pike and said he got tired of unhooking Ed’s fish. Second day their target was Smallmouth Bass, catching a lot of bigger Smallmouth, Todd landing an 18-inch Master Anglers Smallmouth before supper and after supper Ed also caught an 18-incher. Third day was slower, as it was for most guests, but they still caught some nice fish, and Todd came up with the fish of the day being a nice 37” Muskie on his last cast before a storm was about to hit. Classic Muskie catch. Fourth day was almost a complete wash as the winds were so bad that Todd & Ed returned to the dock by 11:30AM and raised the white flag to Mother Nature. Fifth and final day they did not tear em' up, however they did catch a respectable number of Northern Pike, and as Ed put it they had two fish that were picture worthy, however one they lost in the netting process and the other simply got off. In talking with Ed and Todd in their cabin the last evening they really enjoyed their stay and hope to see us again in 2011. 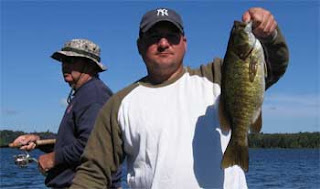 John McClelland from Evanston, IL returned to fish Little Vermilion Lake after a 4-year furlough to enjoy the wonderful wilderness fishing we have to offer on our lake system. First day had John catching a few fish and enjoying some canoeing. Second day was one of his best ever catching so many Pike he didn’t even bother trying to count. Third day was a one fish day, but even a one fish day in the beautiful Canadian Wilderness is great compared to not being here at all. Fourth day had John Picking up his wife Diane from the airport who was joining him for 1.5 days. During this time they enjoyed a hike, canoeing, and going for a great swim to curb the warm temperatures during midday. Both had a great stay with us enjoying the very familiar wilderness surroundings of the Boreal Forest. Hope to see these two back one day. 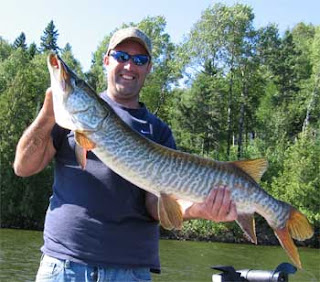 Jim Stalknecht from NJ with son Michael from Guthrie Center, IA returned to Fireside Lodge with Mike’s good friend Rick Crescente from Highland Lakes, NJ. First day fishing these guys did great catching over 20 nice Pike just between Mike and Rick and all were 28 to 34-inches. The key was deep weeds and a very slow retrieve. Second day was not as productive, 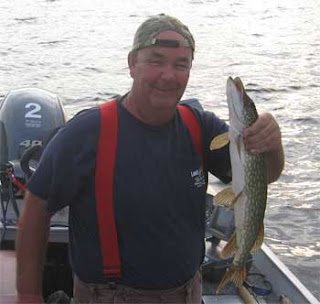 having to retreat by 1:30 PM because of high winds and very tough fishing conditions. After supper they gave it a try and did well catching five Pike in an hour. Third day had Rick & Mike portaging to a Musky lake having plenty of follows, each catching a Muskie and Mike lost a big one. Fourth day was a “Terrific Day Of Fishing” for these three as they caught over 50 Northern Pike, and after losing a nice Muskie, Mike hooked another within 5 more casts which ended up being a Monster 43” Tiger Musky. The picture is worth a 1000 words. Fifth and final day was another fabulous day catching about 40 Northern Pike and losing as many. Jim and a great re-union with his son as did Rick with his best friend. All left saying “See Ya Next Year”.

Returning for his eighth consecutive year was Bill Goodwin from Wilmington, DE with good friend Melvin Harper from Petersbu 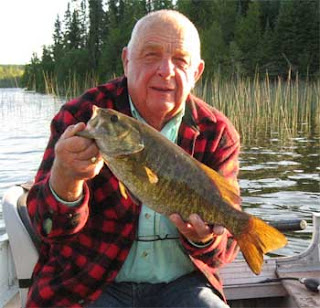 rg, VA for his second visit. First day was very short because of terrible winds and they found themselves in their cabin by 11:30 AM. Second day was still windy but Mel & Bill caught some nice Smallmouth Bass, a few Pike, and while Bill was fighting a Smallmouth a BIG Northern Pike totally inhaled the Smallmouth. After a lot of thrashing around the fish spit it out and swam away. Very exciting event. Third day had these two catching only a few fish until about three in the afternoon when they discovered a new technique. The wind was tough all day so while fishing in a bay they just drifted with Rapalas' while doing nothing and as soon a the lure ticked the weed tops a Smallmouth would slam it. Within 1.5 hours they caught a lot of 15 to 17-inch Smallies. That evening they also caught a bunc 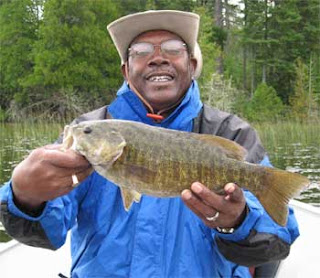 h over 15 inches with bill landing the biggest, which was trophy 18-incher. Fourth day was great catching 22 Smallmouth and 6 Pike, with Alvin catching some in the 17-18” class. Fifth day they did well finding Smallmouth Bass and caught some dandy fish with Mel landing an 18” Master Anglers Award Smallmouth. Sixth & final day was another bass catching day with both Mel & Bill catching Smallmouth in the 14 to 17-inch range. Both had a great fishing trip and hope to return in the future, and we thank them for traveling from Delaware and Virginia to see us at Fireside Lodge.

Richard Klose returned for his third trip to Fireside Lodge with good friend Alvin Savoy for his first trip, both from Sevierv 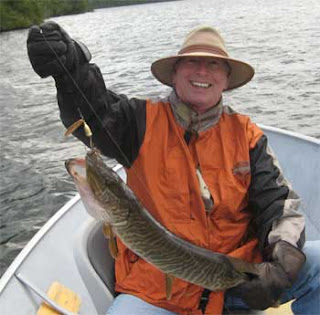 ille, TN. First day these two ordered breakfast and two #6 Blue Fox Spinners. Their breakfast was great and the spinners caught fish in a spot we discussed while they were eating. See how eating in our dinning room can benefit your fishing success. Dick & Alvin said they caught one Pike after another, and the gold spinner out-performed the silver-blue. Second & third days were a lot slower but both enjoyed the nice weather and wilderness that surrounded them. Fourth day, in their words, was great day as they caught a bunch of Pike, Alvin with a big 33-incher and he also caught a trophy 18” Smallie, and a nice 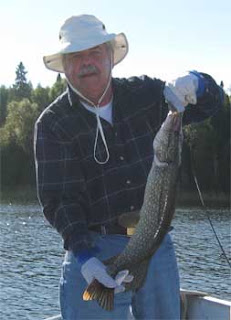 fat 30” plus Tiger Muskie. Fifth and final day they did well catching Pike in the 28 to 32 inch range. Dick & Alvin said they had a very good trip and hope to return in the near future.

Norman and Sandy Alexander from Newton, KS returned to Fireside Lodge for their second visit. First day they struggled to find fish in the morning but the fish turned on later in the day, catching some nice size Smallmouth up to 17.5-inches and Northern Pike. Second day was a great catching day for Northern Pike, landing many of these fighters and they also enjoyed a wonderful shore lunch. Third day had them portaging and catching some Big Smallies, Sandy landing an 18.5” trophy, & Norman with some in the 17”plus category. They both caught a Muskie & had some Big Musky follows. Fourth day was another portage lake adventure that had Norman getting his morning exercise, as he had to portage twice after forgetting the boat plug. They enjoyed having a lake all to themselves and had a ball catching Northern Pike. After supper they targeted Smallmouth Bass and caught a bunch near the lodge, with Norman catching a 17-incher and Sandy coming up with another trophy measuring 18-inches. GREAT day for these two. Fifth and final day they went out with a bang catching Northern Pike one right after another all day long having Quote “The their best day fishing yet”. After supper they only were out for about 15 minutes as lighting chased them in but not before Sandy caught a big 16-inch Smallmouth. Both had a fabulous fishing trip and left saying that we will see them back again, however next time Norman is going to push for a six-day stay. It’s never enough is it???? 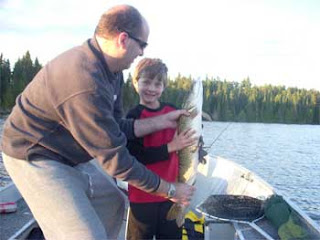 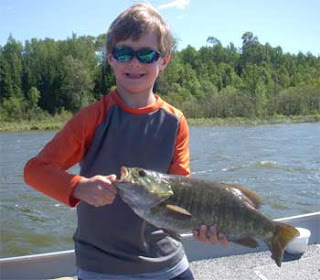 ere back to fish at Fireside Lodge. DOA they caught fish right away with Aaron landing the biggest Pike, (great photo), and all caught Pike and Smallmouth. First day was “FABULOUS” as they caught some Pike and 30-35 Smallmouth Bass, a lot over 16” and Aaron & Uncle Randy both caught Trophy Master Anglers Award Smallies. Congrats to Aaron for his GREAT fishing feat at such a young age. Second & last day another great day catching many Smallmouth Bass in the 14 to 17-incch range, and they all has a blast roasting some hot dogs over and open fire by our natural wonder, Twin Falls”. For this father son & Uncle it was a terrific fishing trip full of family fishing memories with anticipation of many more to come. Thanks for choosing Fireside Lodge for this first very special fishing trip with Aaron. 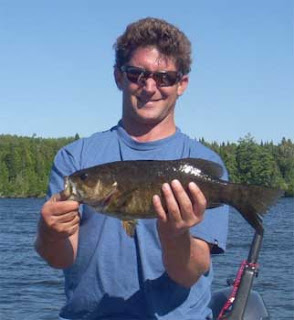