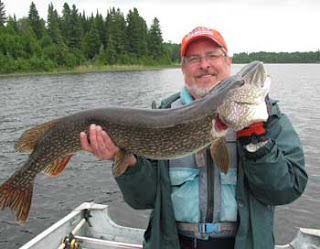 Hello from Fireside Lodge in Northwest Ontario, Canada. We had an exciting couple of weeks here with not only fishing feats but also with wildlife sightings near the lodge. We had Steve Polep see a Moose come down to the water in our bay while standing on the dock, our whole staff and Audrey saw a Lynx walk up or road and behind the lodge kitchen and pause for all to see, many rabbits are all around camp, and we have had several painted turtles making nests and laying eggs by the cabins and boat launch area. What a Great side show to the fishing. See the Lynx and Turtles on our Facebook Page. 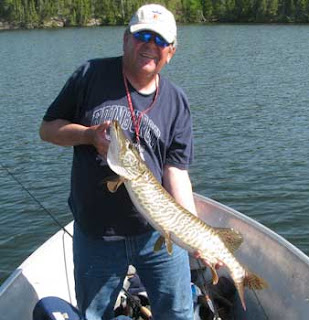 Father & Son Steve/Steve Polep from Cary & Crystal Lake, IL returned for their 2nd time. These two had GREAT father and son time while doing very well fishing for toothy critters. The caught a lot of Northern Pike and with incidental catches of Muskie & Lake Trout. Both caught big fish up to 38.5” including Muskie, several big Lake Trout and each caught big Tiger Muskie. In fact while catching Pike they caught six Muskie in one day. That’s FABULOUS Fishing in any log. Best catch of all was the Father & Son time together & memories made. 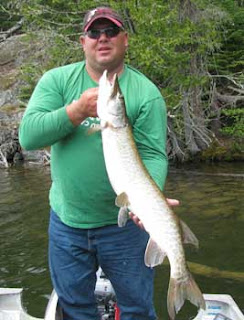 Bob Martinovich & Lorrie Navarro from Babcock, WI were at Fireside Lodge for their first time 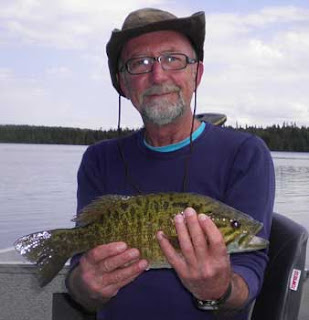 and Lorrie’s first time fishing in Canada. They both had a great experience catching Smallmouth Bass, Pike & Musky Lorrie catching her first Northern Pike ever and many more, Bob caught his first ever Muskie, and an 18-inch Master anglers Award Smallmouth Bass. They also experienced many different wildlife sightings including having a Lynx walk up our road and behind our lodge while eating in our dinning room. It cause quiet a buzz in camp and Lorrie was excited but then she realized the Lynx might be after “HER” snowshoe hare by their cabin.

Vince Danko from Wirtz, VA and friend since kindergarten Bob Ballard from Palm Coast, FL were here to fish and reminisce the years gone by. Their main goal was BIG toothy critters. Well they found them early on, but the fish were in the followin 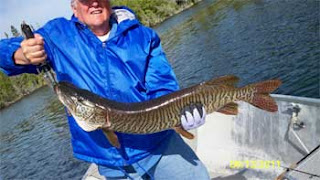 g mood and difficult to catch. After patience & persistence they caught some beauties of both Pike & Musky with Bob catching a BIG Very Fat 39.5” Tiger Muskie. Look for this one on our photo page. They also caught some Pike and Muskie in the 30-34” range. Bob also caught a huge Smallmouth. Both had a fabulous time and hope to return. 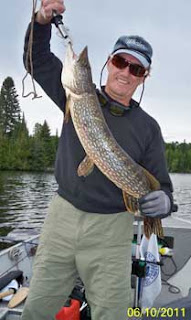 Long time return guests Father and son Larry & LJ Psyk from Onalaska & Lacrosse, WI. Ken Beta and Jim Nelson from Fox Lake & Oak Brook, IL were back to enjoy fishing in the wilderness. 1st day was a great start as they caught 40 Smallmouth and Larry & LJ each caught 18”+ trophies. 2nd day had Ken & Jim catching 17 up to17.5” while Larry & LJ caught 11 with a few Pike. Next day had them catching 49 as a group with a few Pike and one Musky. Larry and LJ really turning it up on their 5th day landing 43 Smallmouth themselves. These two also caught 4 Master Anglers Smallies 18-18.5”, and Ken landed two Muskie the last day. This group had been fishing together for over 40 years and for them being together to make another set of fishing memories is the biggest catch of all.

The Kauffman family John, Jan, Katie, & Allison from Monroeville, IN returned for their second experience 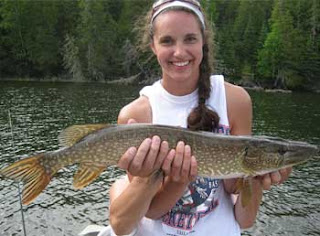 fishing at Fireside Lodge. DOA they caught 8 pike and lost 8 with many follows. Great Start. First full day had them portaging for a half day experiencing very fast action landing 38 Northern Pike in 4.5 hours. That evening they replenished some damaged tackle with Jan selecting a Pink color lure. Next day had them lunching at Twin Falls and got into a bunch of Pike lading some over 30” and making contact with a few 35” and larger. Guess what caught the larger Pike. Yes, the pink lure. Third and final day started like the other 2 with Dad and his girls leaving the dock at 5:45AM for a morning fish and Allison was using the pink lure and caught more that Katie, & John. On their third and final day they were off to Twin Falls area and after some mor

ning equipment situations cleared up they had a lot of action on Pike with the Pike Blue Fox again catching bigger fish over 30”. On their final night after supper they had a ball having fast action catching Northern Pike and finished with a bang. Greta family fishing trip and wonderful memories made.

Good friends Robert McCann & Steve Johnson from Springfield & Haltown MO both retuned for their fifth time. Here for 3 days they made the best of it tearing up the Smallmouth bass catching countless Smallies in the 15 to 17.5” range. It was non-stop to the end when Robert fishing for the last evening after supper caught 23 in a few hours on his favorite bait; the sinking worm fished wacky style. Both had a terrific time being away from work and breaking away from their everyday routine fishing and having good conversation. 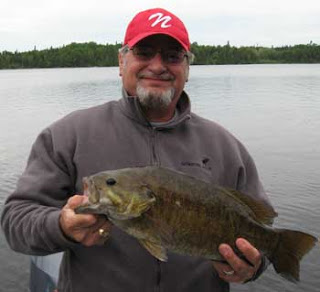 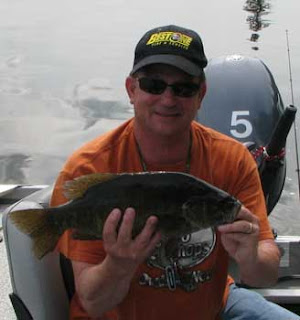 rn. Fabulous first full day as 2 of 3 boats caught over 80 Smallmouth each, with a lot 16 to 17.5”. Second day all three boats caught a Bunch of Smallmouth again and Paul came up with a 19” & Don an 18.5”. Third day was a repeat with each boat catching 50+- Smallmouth & the fourth was even better as they got into catching lots of Pike (30-50 per boat) with the Smallies, landing 5 trophies between 18 an 20.25”, and Paul lost a HUGE Muskie in the netting process. All went home having great stay already planning a return trip. 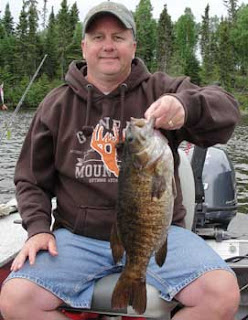 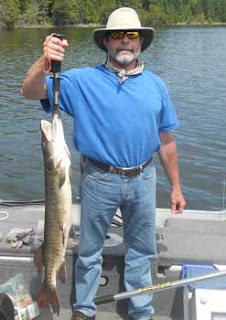 ht some nice Smallmouth Bass and Pike with Jim getting the BIG fish of the day landing a 37” Muskie. Next day was great as they caught some HUGE fish with John catching an 18.5” Smallmouth Bass, Jim landing another Musky at 36”, and Ronnie hit it out of the park catching his biggest ever, a 41” Monster Muskie. Last day had them catching many more Pike as the action was fast on small to medium size Northern Pike. Before leaving the made reservations for 2011.

Dan Mosier from Lincoln, NE kept his annual tradition since 1998 of fishing at Fireside Lodge with one of his kids & this year it again was Nathan. Within 4 hours of their arrival they caught 11 Smallmouth & 9 Pike. Another day they got into some nice 30”+ Pike landing a pair of 34-inchers as Dan was having a blast with a new 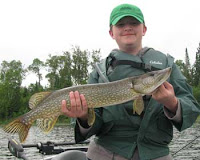 Rapala near surface lure watching the Pike come up behind and attack it. Another day had them having a FABULOUS day catching 162 Pike and Dan landed a trophy Monster 42” Northern Pike we estimated at 24-25lbs because of its enormous girth. Nathan (spoon guy) not only encouraged Dan to use a spoon that caught this fish, but also netted it and took great photos. On their last day with a big smile Dan said they had a slower day landing 80 Pike Nathan’s biggest was 34” & Dan’s was 36”. It/s pretty special when a slower day means catching 80+fish!!! Both added some great memories to their Fireside Lodge fishing log concluding Dan’s 15th trip, each with 1 of his children.

Posted by Alan Brandys/Fireside Lodge at 4:28 AM