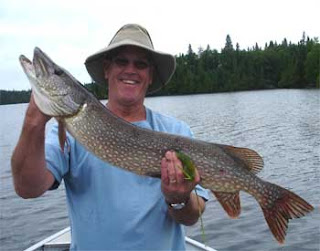 Hello from Fireside Lodge in Northwest Ontario, Canada. Weather wise could not get any better than this past week. The only rain, which we need more of, came during the night and our daytime highs were 72- 82 degrees. 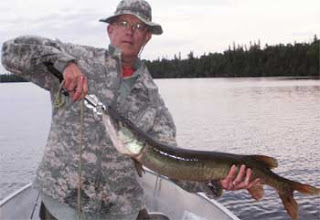 Long time guests Al Sins & Don Funderud were back to chase BIG toothy critters. Al wrote me an email after their trip so I will let him take it from here. 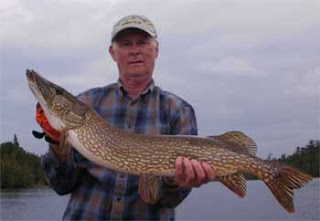 week. As always, Fireside gets an A+. I don't think there

is another operation that can compete with you.

Not bad when we only looking for musky. Don got 3 musky

was another story. As you know I like to fish Cedarbough.

Don lost 1 musky while I lost 2 in Cedarbough, 1 at the boat between

know we only count them when we can identify them as musky. Overall

we were happy campers. FYI, The big musky I hooked & lost, 5 of the pike

& the citation SM were caught using your technique with the XR-12. You can be sure

I'll give that a try next year. Looking forward to next year already when Dave

& Pam will be joining us. Thanks again for everything”. 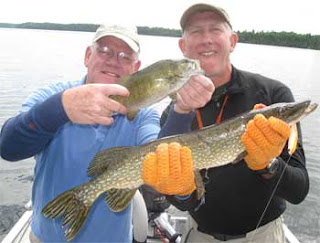 Brothers and first timers to Fireside Lodge were Mike & Jim McDonough from Pinetop, AZ & Rescue, CA. Never fishing for Pike before, these two caught 14 on their 1st day. Another Pike day brought them fabulous fishing as they caught over 35 Northern Pike along with plenty of other action in follows and lost fish. Lure that work the best, 3/16oz Rooster Tail!! Why? The May Fly hatch was on, and who would have thought a tiny spinner would be so affection on 25 to 30” Pike. Having had success with Pike they tried their hat at Muskie. This day as very exciting having some follows, Mike catching his first Muskie ever, & Jim hooking his first but lost it in the battle. Mike also hooked another and the big fish jumped completely out of the water and as it slapped down on the waters surface it shook Mike’s lure. Not bad being from AZ & CA. They both had a great time and were sad to le 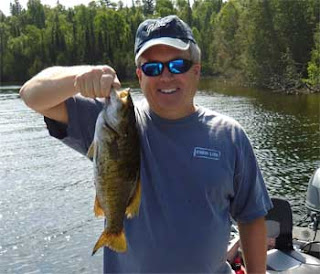 ave hoping to return in the near future.

Dan Murphy and his 12-year-old son from Hortonville, WI returned to Fireside Lodge for their second time. They got off to a fast start catching 20 Smallmouth Bass on their DOA & 17 More the next day with most being between 14 to 17.5” & Tom landed an 18.5” Master Anglers Award Smallie and caught a big 38.5” Musky. GOOOOO TOM!!!!! Next day was a fabulous Smallmouth Bass action landing over 35 fish between 14 to 17.5 inches along with a few Pike. Their 3rd day brought their best Pike fishing day ever as they hooked up or had follows on 100+ Pike, & landed somewhere around 40. On their 4th and final day they portaged to a lake for their first time in hopes of catching another Muskie. Well, they sure did find the Muskie, but hooking one was another story. Musky being as they are were not cooperative, despite getting many follows. They did however catch over 30 Smallmouth Bass with all being 14 to 17.5”. They finished the day and their trip by catching more Smallies after supper and watching the beautiful Canadian sunset. Dan & Tom came to Fireside to catch fish however their biggest catch of all were the memories made between father and son.

Matt Smith from West Friendship, MD returned to Fireside Lodge with his wife Catherine Collins. These two had a wonderful time together as Matt, already being familiar with our lake system was able to plan their events. First day had them searching for Smallmouth Bass and that evening really got into some fast action on the surface using Buzz Baits. How fun is that??? Next day had them portaging to a lake for a fun adventure a 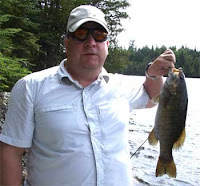 nd they caught many Smallmouth Bass with Catherine landing the biggest measuring 17.5” along with a bunch of perch, and saw 6 big Musky follow their lures right up to the boat. Next day was taking a 45-minute creek ride to Musky Lake and Catherine had a blast going here for her 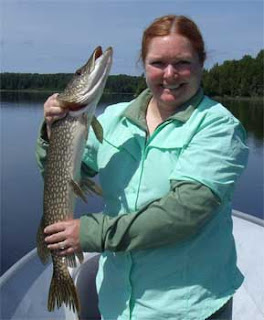 first experience riding through this ecological wonder. They had a great day catching a bunch of Northern Pike. They prepared for their last day the evening before by making a push pole from a long stout tree branch to push their way over the silt at the mouth of Cedarbough creek. The ouch pole worked great and they enjoyed their day catching some fish, include Matt landing an 18” Master Anglers Award Smallmouth Bass, and had a fabulous shore lunch over an open fire. They had a wonderful stay with us making memories together, which is the biggest catch of all. 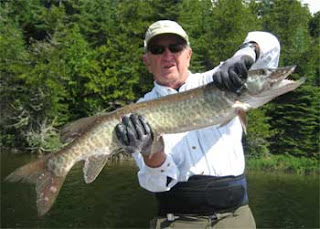 The Womble Group of 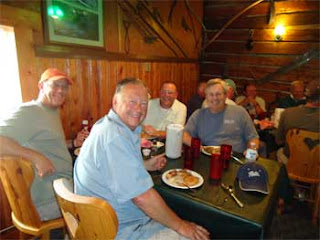 17 guys from Oklahoma were fishing at Fireside Lodge for their first time. They included Horace Phillips, Tom Green, Bruce Wyckoff, Larry Heidebrecht, Dave & Stevce Womble from Oklahoma City, Perry Phillips & Tim Turner from Okarcke, Dave Hornebeek, Matt Wilson, & Virgil Onan from Edmond, Tom Womble from Park City, Jim West from Moore, Ron Walker from Stillwater, Wayne Farabough from Bixby, Rick Byrd from Norman, & Tyler Kuepper from Tulsa. First day four of these guys did great catching a lot of Smallmouth Bass, & Steve landed a 37” Northern Pike, lost an even bigger Muskie in the netting process, & another broke him off. Next day was even better as they again caught many Smallmouth Bass with one boat catching 60 fish, a 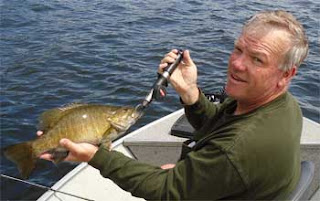 combo of Smallies and Pike including 4-5lb Smallmouth Bass, and another boat caught 49 Smallmouth Bass & 2 Pike. That’s great fishing, especially since none of the group was ever at Fireside Lodge before. Third and fourth days were also full of fishing action again with everyone catching a bunch of Smallmouth, Horace landing his first Musky ever while fishing with no leader & 8lb test line. What a battle this was, but Horace ended up winning a getting a great photo with his Muskie. Perry and Tim tore em up on the last day catching well over 100 Pike & 10 Smallmouth, including 6 trophies between 18-20-inches. Tim was looking for a refund on a lure I sold him because it was all broken up, but after catching over 100 fish on this lure I told him he got his monies worth. All left having a wonderful time with us at

Fireside Lodge and all said they will return. 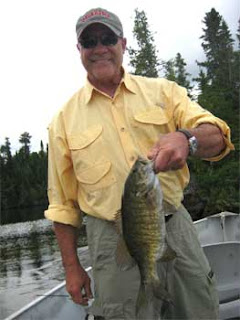 “As always we want to thank you for the wonderful time that we had at Fireside Lodge this past week. Our time went so fast, and we are already counting the days until we return.

Some highlights of our trip include Mike Colitti's catching a 38-inch northern pike three days in a row. 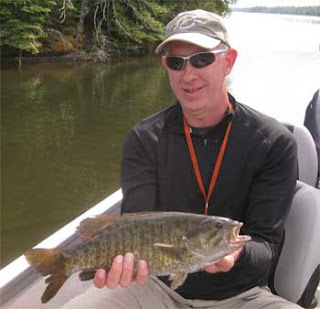 His best day he boated 35 total fish. Mike Muir had another banner trip. His best day of fishing is when he nabbed 76 fish (3 muskie, 10 smallies & 63 northern). His total for the trip was well north of 200 fish. Mike Strohl hit the jackpot on Monday when he "hit for the cycle". He caught one Tiger Musky, One Musky, 4 Smallies and 23 Northerns - one of each species. Tom Hurdman teamed up with his brother Andrew (Chester, NJ) on Monday and hammered the pike & boated 121 fish. Jeff Coutant and I had the most prolific boat on when he boated 66 northern and bass, while I added 68 fish for a boat total of 134 for the day! We want to shout out to our missing buddy Jay Lind who missed the trip this year in order to help care for his father.

I would also like to share a special story with you. The Hurdman's father was a military veteran and fishing fanatic. He made it a point to take the boys fishing as often as possible when they were little. Unfortunately cancer took him at a young age. Recently Andrew came across his father's "dog tags" that were in storage. After a short discussion, the Hurdmans agreed that it would be a fitting gesture to bury the tags at sea. We brought our boats together in the middle of the lake, the Hurdmans spoke some very appropriate and touching remarks, then committed the "dog tags" to the lake in honor of their father's love of fishing and time with his family!

On behalf of the boys, thanks. We had a wonderful trip to Fireside and we can't wait to come back. 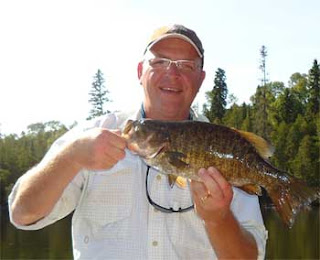 Posted by Alan Brandys/Fireside Lodge at 7:53 AM

Email ThisBlogThis!Share to TwitterShare to FacebookShare to Pinterest
Labels: and Northern Pike, Muskie, Terriffic Fishing Lodge in Canada for Smallmouth