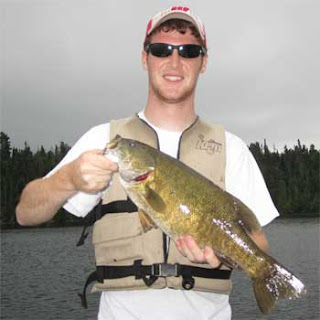 Hello from Fireside Lodge in Northwest Ontario, Canada. HOT! HOT! HOT! That goes for the weather & fishing! It was gorgeous weather wise having temperatures in the high 70’s to high 80’s, & the fishing was great as you will read about below. 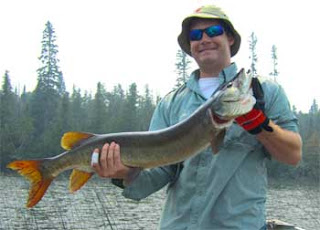 Guests since 2002, Bergen family of father Tim & two sons Joe & Adam from Orland Park, IL were back bringing friend Eddie Tracy from Monee, IL. First day was a great Northern Pike day as they caught 47. Second day they were in search for big fish targeting Muskie with great results. Joe caught a 36.5”. Adam a 32.5” & Eddie caught his 1st ever Muskie at 28.5”. They also caught some big pike with both T 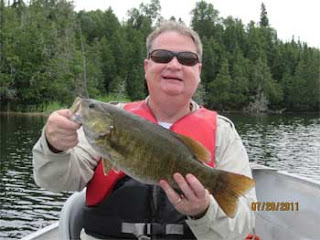 im & Adam landing 35.5”ers & Joe, Adam, & Eddie were full of excitement as they described a Huge (45-50”) Musky that followed their lures 4 different times and a 5th just cruising by there boat for a look. Adam said at one point he was shaking. 3rd day was a little slow but the fourth day was very special. They set out to catch Muskie & that’s exactly what happened as they landed 7 total. Eddie had the largest at 37.5”, Joe caught a 36”er, and Adam a 35” Musky. Adam & Joe each caught a 33” Pike and to top it off Tim & Adam both caught trophy Smallmouth Bass, Tim’s being huge at 19” and Adam’s was a MONSTER measuring 21”. All went home having a FANTASTIC trip making another set of family fishing memories. 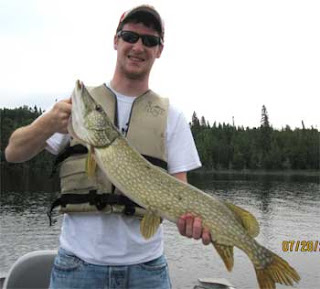 Long time guests, 16 years, returning consecutively since 1995 are Jerry & Wanda Miller from Erwin, TN. 1st day Jerry guided them to catching over 35 Smallmouth & 10 Pike. The Bass were big with Jerry landing two over 18” & Wanda lost the biggest of the day. 2nd day was less numbers, but a lot of quality Pike & Smallies. Big excitement was watching a huge bear swimming across the lake for 25 minutes. Jerry really got into Smallmouth between 15 to 17” along with some nice Northern Pike & Jerry lost a Pike 35-37”. 3rd day Jerry got into some Big Smallmouth 16 to 18” using surface lures. The action was very exciting always anticipating the strike. 4th day was short on the water because of some severe 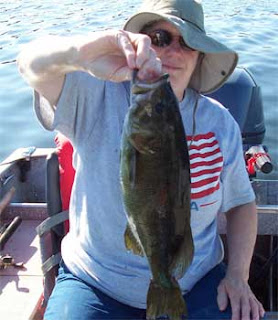 thunderstorms, however they still caught some beautiful Smallies. 5th day it was so windy they decided to take a day of rest. On their last day Jerry decided to try some new areas. They caught some very nice Smallmouth in the 14 to 16” range to end of their trip in anticipation of their next visit in 2012. 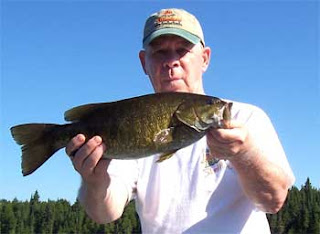 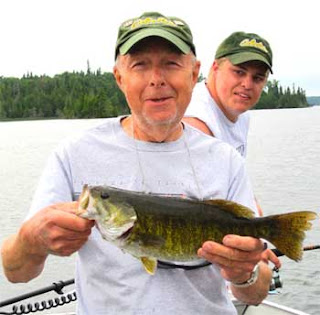 y Lots of Pike was on the menu for these three & Josh was the leader in number & size. 2nd day they caught too many Pike to count & it was Tom having the hot hand. Next was portage day for Muskie & Smallmouth, but since it was over 90 with sun & high humidity they targeted Smallmouth & did very well catching many in the 14 to 17” range & Tom landed a small Muskie. 4th day was textbook fishing before thunderstorms rolled in, & the action got fast a furious catching many bigger pike in the 30 to 35” range & some nice Smallmouth. Despite high winds their fifth day was very productive catching many Northern Pike & several Smallmouth Bass. 6th & final day they got into some Bigger Northern Pike with George catching several large 30-33” Pike. All had a special family fishing trip & are hoping to return in 2012. 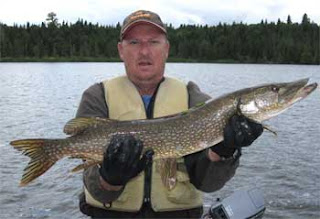 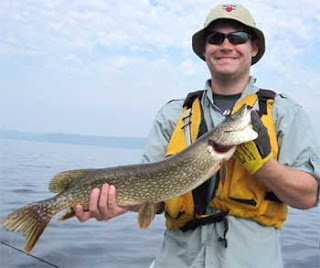 t the world on fire. We discussed fish location & presentation & the 2nd day was much better with Chris & Bob catching Smallies, Chris landed a nice 33” Musky & they had 6 other follows. 3rd day was their best as they caught countless Northern Pike with Chris & Bob also getting into a bunch of Smallmouth. Chris landed two trophies at 18.5” and a HUGE 19”er. Next day was a 1 day tournament in Terry Lake. Opposing team players fished with each other for a half day to control scores & to create competitiveness. The rules were 1 point for each Northern Pike & 5 points for each walleye caught. This was created by a plea from Dennis & Joseph who were behind in the weekly competition on the largest fish in each category of Smallmouth, Muskie, & Northern Pike. Well, Dennis was the only person who caught walleye. Catching three put him and Joseph in the winning circle for that day. 5th day was very windy but despite the adverse conditions all caught a lot of fish, both Northern Pike & Smallmouth Bass. Chris landed 2-18” Smallmouth & Bob caught 1 18”er. Dennis & Joe caught all Northern Pike, too many to count. 6th & final day had them all Musky hunting having follows and landing 3 with Chris catching the largest at 32.5”. Chris also caught an 18 & 18.5” along with Bob catching 2-18” Trophy Smallmouth Bass. 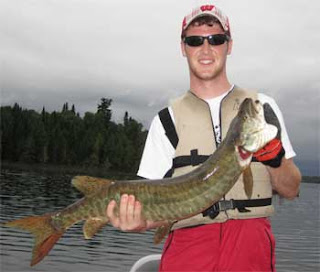 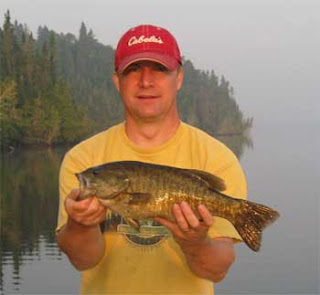 trip. All caught a bunch of Smallies on DOA, & before breakfast on their 1st day David a Bob had 25 & Todd & Wendell caught 12, most on surface with a Torpedo before breakfast. The rest of the day they caught lots more on #3 Mepps Spinners. 2nd day was even better catching 40 to 50 Smallmouth/Pike per boat, having a mix of sizes up to 17.5” on Smallies & up to 30” on Pike. Third day was mostly Smallmouth Bass with a

few Pike mixed in, and Smallies ranged up to 17.5”. 4th day was full of action as they caught more Northern Pike than they could keep count of, 40-50 per boat, plus had ex

cellent Smallmouth fishing landing many along with a lot being 15 to 17.5”. 5th & final day, despite windy conditions, they still caught plenty of Smallmouth Bass, ending their trip on a high note. 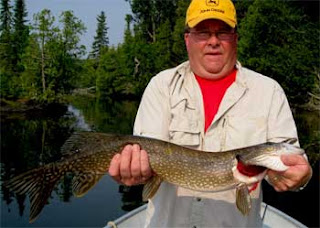 David Powell from Springfield, IL & Jim Stark from Mission Viejo, CA returned for their 3rd trip in as many years. 1st day they caught a bunch of Northern Pike somewhere around 40+ with lots of other action. Next day was a Muskie & bigger Pike quest. So after discussion of locations, depth, & presentation they went out and caught a number of bigger Pike but the Musky were no shows. Jim did so well he had to replace a lure that got all busted up. That evening they also figured out the Smallmouth catching them up to 17.5” using a small x-rap. 3rd day Closs Lake portage was their choice & even though they did not land a Muskie Jim lost one. They also had some follows & caught Smallmouth. 4th day was fabulous as they caught about 40 Northern Pike & the action seemed non-stop with all of the fish lost & follows. Both left having a fabulous time & hope to return in 2012. 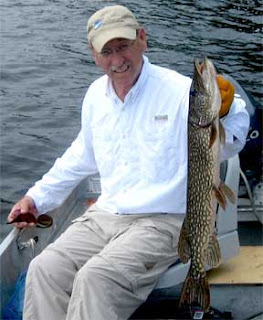 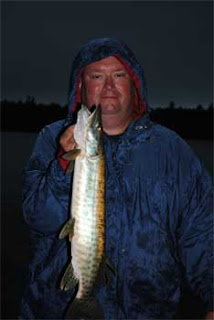 erience fishing in Canada. 1st day was all about Pike as they caught many & had many follows. 2nd day was a portage for Muskie & Smallmouth Bass being a perfect day for Musky as a weather change was expected. It sure changed as severe thunderstorms appeared in the early afternoon. The Musky were on cue with textbook writings becoming very active just before the storm hit. Lauren had 3 follows, which scared the daylight out of her, & Tony hooked up on three Muskie in a short time period, & along with Lauren’s help landed one. The photo shows the weather conditions, as it w

as a completely black sky behind Tony in his Musky photo. Their last two days were full of fun catching fish & making memories between father & daughter in the Canadian Wilderness. As a side story Lauren, having never been here before, ended up knowing another guest, Eddie Tracy above, as the attend the same High School. What are the chances of that!

Dave Henry returned to Fireside Lodge with his son Jake, along with Tim Traveny from Palmyra, PA & Bob Mezo from Dixon, IL. 1st day was slow but they still caught some Pike. 2nd day had Jake catching his 1st Musky at 33” & Dave landed a 21” Monster Trophy Smallmouth Bass. They all also had a ball catching Northern Pike & Smallmouth Bass. 3rd & final day all had their best day catching well over 100 Northern Pike as a group along with catching some BIG Smallmouth Bass. Bobby caught a GIANT 22” Trophy Smallmouth. This ended their short trip with a BANG, & all hope to return to pick up where they left off next time.

Make sure to go to our websi 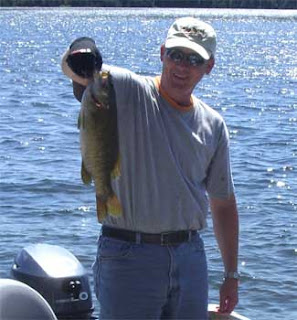 te listed below to see the 2010 Photos

Posted by Alan Brandys/Fireside Lodge at 5:10 AM