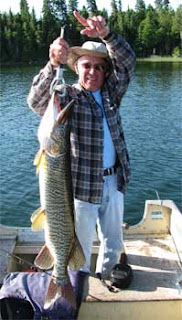 Hello from Fireside Lodge in Northwest Ontario, Canada. Weather in one word was gorgeous having 1 short rain even & highs in the mid to upper 70’s most of the week 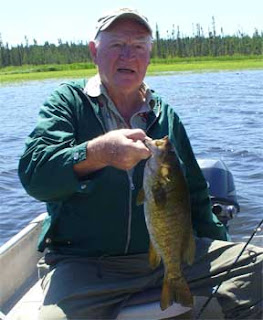 Jim & Rosemary Marschke from Tavares, FL returned for their second trip with us at Fireside Lodge. First day we had some rainstorms, so Jim was searching for fish himself & after patience & perseverance he found some fast action Smallmouth B 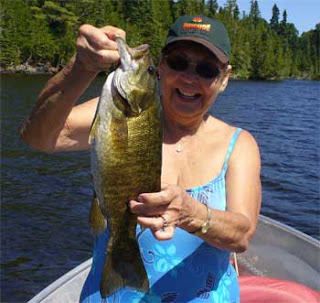 ass in a drop off near weeds. Next day they both did great catching Smallmouth Bass with Rosemary landing a Master Anglers Award 18.5”er. Third day had them fishing for toothy critters & they did fabulous catching somewhere around 35 nice fish. On another day they almost repeated by landing 30+ Pike with Rosemary again catching the biggest fish. Last day was a shorter day on the water enjoying there last moments in our great wilderness setting they have fallen in love with. In this area they call it “Getting Bushed”. Both left saying there stay with us was fabulous & would definitely return.

The Dobson family Dave, Terri, & Kaitlin from Milwaukee, WI returned for their 6th consecutive year. On the evening of their DOA they got right into fish landing 10 Northern Pike & Dave caught a BIG 37” Pike, his personal best. 1st full day the 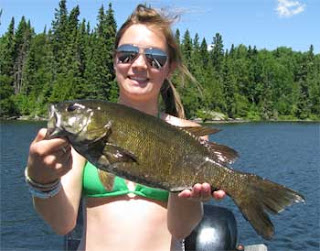 y did well on Smallmouth Bass catching a bunch & Kaitlin set the bar landing an 18” Trophy Mater Anglers Smallie. 2nd day was a trip up a creek in anticipation of Pike action. No disappointment here as the caught well over 50 Northern Pike. Next day, with the weather giving us a cool temps, they relaxed & enjoyed the wilderness atmosphere. After supper was their fishing time catching a few Smallmouth on the surface & captured a beautiful sunset. 4th day was a great family day as they caught Smallmouth & Northern Pike, had a nice break by Twin Falls enjoying this natural wonder, and concluded their day with Terri & Kaitlin taking their traditional Kayak tour. All had a fabulous trip & hope to return again next year. Thanks for making some of you precious family memories with us at Fireside Lodge. 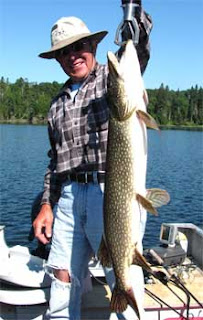 Father & Son Jack & Steven Starnes from Wise & Duffield, VA were back f or their 7th year in a row 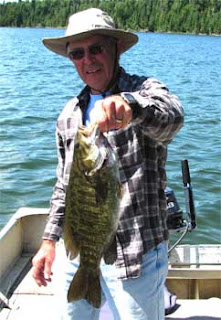 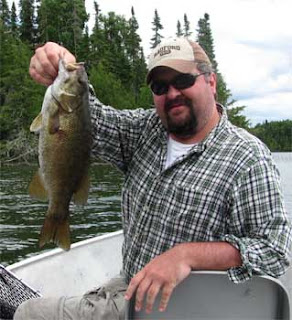 out 65 Pike. Landing some big ones, catching 3 Muskie with Steven & Jack each catching 1 over 40”. Third day had them catching 40

d losing some BIG Pike. 5th day had them catching about 25 Pike and just a few Smallmouth, however Jack landed two huge Pike in the 38-40inch range with enormous girth. Next day they had an unbelievable Musky fishing & Muskie catching day as these two landed 9 Muskie, Jack catching the MONSTER, the only Tiger Musky measuring 40.5-inches. In the picture the fish’s head is bigger than Jack’s. They also caught about 20 Smallies with Jack landing a 19”er with a giant girth. These photos are a must see!! La

st day sent them off with about 40 fish, mostly Pike & before leaving they made their reservations for 2012. 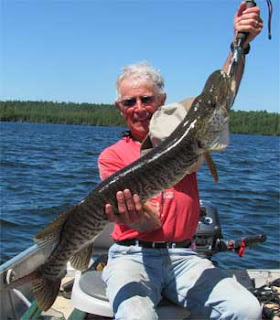 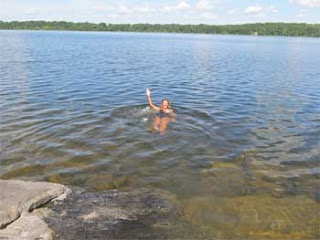 Marilyn & Joe Foos from Alpharetta, GA were back for their second trip with us in as many years. First day fishing they had a FABULOUS Northern Pike day, catching over 50. Second day was all about Smallmouth Bass as they had a very good day catching 14 to 17 inch fish. Third day was slower due to the wind & cool front conditions, Fourth day had these two tearing up the Pike again landing over 30, and also caught 12 nice Smallmouth up to 17-inches. Fifth day they caught a bunch of Smallmouth Bass having lots of action. Also, they enjoyed some time by Twin Falls after eating lunch having an all around great day. 6th day was their best day ever as the caught many Northern Pike (countless) including 10 over 30” and big Smallmouth Bass 16 to 17.5” an 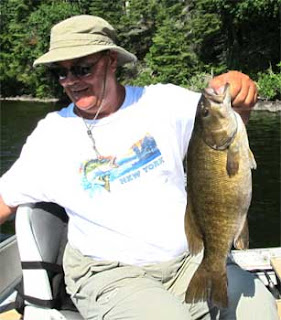 d Joe got a trophy 18”er. On their remaining 3 days they continued to do well catching both Smallmouth & Northern Pike. Marilynn lost the BIGGEST Smallmouth of her lifetime during the netting process & Joe said it was HUGE. The debate was weather it was lost because of Joe’s netting or Marilyn’s loose drag. I decided it best be left at a team effort & all agreed. Also, Joe lost a GIANT Musky at boat-side as the advantage went to the fish because all Joe was using was a jig, and all be got back was the wire eye from he jig. As they say “That’s Fishing”. Also, Marilynn got her wish of hot weather & she went for a mid-afternoon swim on her last two days. Both had a FABULOSU stay and made reservations for 2012 before leav 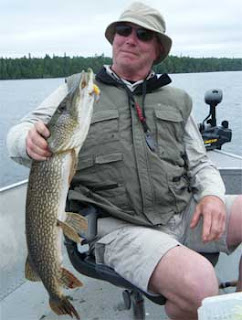 Fishing at Fireside Lodge for there 1st time were Ken Coleman from Traverse City, MI his son Ken (KC), from Houston, Texas and Brad Jensen from Rogers, MN. DOA they went out and caught about 12 Northern Pike several Smallmouth Bass & a Muskie. GREAT START!!! That same evening the action was great on surface Smallmouth Bass. First full day they had a very active morning catching a lot of Northern Pike with a few Smallmouth Bass mixed in. Second day they caught a lot of a Northern Pike again while exploring a new section of water on Little Vermilion Lake. Ken said it was a quality day with a lot of pike landed in the 30-34” range. Short Story: As Brad was fighting a Pike Ken tried to net his fish before he was able to reel in his lure. As his lure sat idle in the water a big Pike slammed it. Lucky he was able to hold on with the result being a double. All left have a great 3 days of fishing and memories that will last a lifetime. 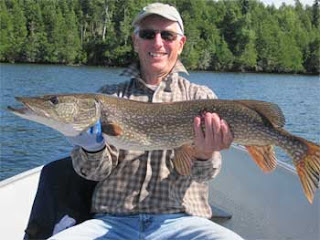 First timers were fly-fisher brothers Jim & Bill Lewis from Andreson & Gladwater, TX. First day they caught some & lost a number of Smallmouth. Second day was fabulous as they caught to many Pike to count using Enrique Puglisi Sliders & a Dahlberg Diver. Third day brought the action and quality Northern Pike fishing with Jim having the hot hand catching most of the fish as the same flies were producing as the day before. Brother Bill was expecting Jim to brag in the dinning room about how he out fished him on the water, however Jim was very considerate and let Bill’s anticipation tell the story of the day. Last half day they did good catching Smallmouth and a few Pike. Both left enjoying themselves making another set of fishing memories between brothers. 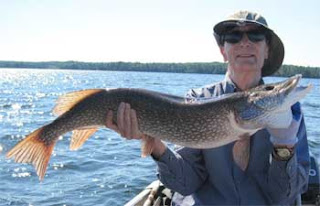 Kent Williams & Bill Black from Atlanta, GA. returned to Fireside Lodge for their 8th consecutive year. On their DOA before supper, just in a few hours, they caught a dozen Northern Pike. GREAT START!! First full day the caught many Pike including two huge 37/38 inchers that weighed 18-20lbs each having a giant girth. GREAT DAY!!! Second day was suppose to be a Smallmouth day but turned out to be an 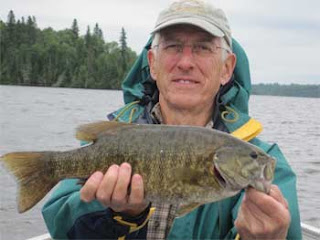 other GREAT pike fishing/catching day as these two landed over 30 BIG Pike, almost all being over 30”, Bills biggest being 35” & Kent’s was 37”. Both had huge girth and Kent also caught a 38” heavy Muskie. As for Smallmouth Bill did catch a trophy 19” Master Anglers Award Bass. 3rd day was one of those tough fishing days, according to Kent, but they still caught over 20 fish. Great marketing when a very challenging day at Fireside Lodge still produces over 20 fish!!! Thanks Kent & Bill. Fourth & final day had these two having fabulous day with Bill catching over 20 fish & Kent had 15, but Kent did it his way, which obviously worked later in the day. Both had a terrific stay & were talking about returning in 2012 during August or September so the trip does not conflict with Bill’s 50th wedding anniversary. An early congrats to Bill & his wife, and thanks for making your fishing memories with us at Fireside Lodge. 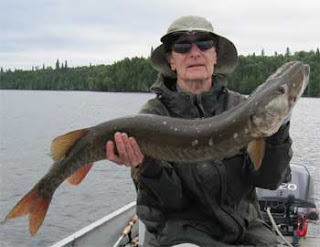 Posted by Alan Brandys/Fireside Lodge at 4:08 AM