This week was the 3rd in a row that was cooler than normal. Thursday’s high was only 55F, which is 19 degrees below normal however the fishing was terrific during this week.

Father / Son Scott & Sam Kimball from Olathe, KS returned for their 4th time bringing father in-law Dick Dalebout from Provo, UT. DOA the Northern Pike were active as they caught 10 along with many follows in just a few hours. 1st day was high adventure navigating a creek & dealing with a beaver dam to access a back lake where they caught 24 Northern Pike in just several hours of fishing. 2nd day started at my Tackle Shop with Scott & Sam looking for a lure to catch a Muskie. They took my suggestions and off they went. Well the day’s story had Sam catching his 1-st Muskie a fat 28”er, and his grandpa also caught his first ever-measuring 38”. It was a terrific Muskie fishing day & a special memory made between grandpa & grandson. 3rd day they caught some PIke & had a lot of big Musky follows. 4th day was a FABULOUS Musky day having many follows with Scott catching a fat 29” Muskie, and rookie fisher of the group Dick again came up with the BIG fish landing a 42.5” Tiger Musky. 5th day was a challenge with the severe cold temps, high winds, & rain however these three stuck with it & caught 3 fish, one each that would make any fishers day. They were all huge, a 39” Tiger Musky by Sam, 39” Northern Pike by Dick, & a 39” Muskie by Scott. This makes for a 3 generations memory hard to beat. 6day was back through the creek & breaking up a beaver dam with great results as the caught 47 Northern Pike. 7th day Scott led with Northern Pike of 29,31,32,33, &34” plus a very large 37” Tiger Musky. 8th day they finished catching some nice Northern Pike up to 34”. All had a fabulous time making special memories between three generations.

Mike Stevens, Lake Barrington, IL & Jack Schneider from Huntley, IL returned for their 2nd trip bringing brothers Chip & Paul Douglas from Rolling Meadows & Hoffman Estates, IL, James Whittington from Wheeling, IL & Bob Lauffer from Clermont, FL. 1 st Day Mike & Jim caught plenty of Smallmouth Bass & a few Northern Pike while Jack & Bob went Muskie fishing having 18 follows from big fish but no takers, however Bob did catch a Trophy 19.5” Smallmouth Bass. 2nd day was Terrific for Mike as he caught over 20 Smallmouth Bass ranging from 14-17.5” & his fishing buddy Jim caught 6 SB. Bob had a good day catching 7 good Smallies and 5 nice Pike all from a lure I suggested to him from our Tackle Shop.  3rd day had this group doing FABULOUS with Mike & Jim catching a bunch of Smallmouth Bass using Mepps spinners & Mike caught an 18.5” Trophy. Bob had a super day catching a 33, 34, & 36” Northern Pike and a 37” & 39” Muskie, all these fish being caught on another lure purchased at our tackle shop. 4 th & final day the group caught many nice Smallmouth Bass with Bob catching a Trophy 19”er, along with some Northern Pike and Chip caught his 1st Muskie ever, a fat 32” Tiger Musky. All left having had a great time with Mike saying they hope to return in 2014.

David & Jacob Henry from St Charles, IL returned for their 3rd time along with Bob Mezo from Dixon, IL for his 2nd trip. After getting by a floating bog & breaking up a beaver dam to get through a creek into a back lake they had fabulous fishing catching 42 Northern Pike & Bob caught a Trophy 18.5” Smallmouth Bass.  2nd day was a back to reality day catching 6 fish. There 3rd & final day had them back up the creek only to find the beaver dam they broke up about 36 hours earlier was build back up bigger & better. They could hardly believe it but they broke it down again & off they were to a great day of fishing. In total they caught 52 fish all being Northern Pike except for 4 Smallmouth Bass. Great finish to a fabulous short fishing trip.

Tom & Jen Born from Lakeville, MN returned for their 9th time. 1st day they caught Northern Pike 31-32” & Jen landed great Smallmouth Bass at 17.5”. Jen shined on the 2 nd day as she caught 2 Trophy Master Anglers Award Smallmouth Bass along with several Northern Pike.  Both Smallmouth were a HUGE 19”. 3rd day Jen caught a Musky and they caught several Northern Pike while exploring new fishing areas.  4th day after discussing some potential new fishing areas & particular structures they had a good day having 14 Big follows from toothy critters, Tom caught a 36” Northern Pike, had a good size Musky get off after making an acrobatic jump, and Jen did catch a Muskie. 5th & final day had them contending with a severe cold front with high winds & heavy rains. They stuck it out until about 3:30PM catching some fish and having a few “MONSTER” follows in new fishing areas, which will add to the log of fishing spots they have developed over the years.
Jeff & Kathy Bernel from LaPorte, IN returned for their 2nd consecutive year. 1st day they caught 12 nice Smallmouth Bass.  2nd day both caught some great Smallmouth Bass enjoying a nearly perfect weather day. 3rd day & 4th days were very similar catching a lot of Smallmouth Bass and learning the value of leeches, saying that when all else fails the leeches will always produce Smallmouth Bass. Jeff had the biggest Smallmouth of the trip landing a 17.5” large Smallmouth. They also really enjoy the wilderness atmosphere that surrounds them when fishing at Fireside Lodge and were touched by a surprise bottle of wine arranged by their daughter Laurel. Jeff & Kathy left already looking forward to next year as they made their reservations for the same dates before departing.

Mike & Zack Gerulski from Huntington Woods, MI were making their 9th father & son trip with us at Fireside Lodge. 1st day had these two catching 13 Northern Pike up to 32” and 2-16” Smallmouth Bass. 2nd day was another great Northern Pike day catching a lot of fish, both missed a big Pike & Zack caught a big 17.5” Smallmouth Bass. 3rd day was a very cold windy day with heavy rain that brought had then at the dock before noon. They caught a few fish and some zz’s &attempted a fish later however were pushed in by Thunderstorms & wind. They did catch 4 Pike & several Smallmouth Bass & Zack lost the Smallmouth of a lifetime after his hook broke at the shank leaving him only with the jig head & the stump of the hook.  4th & final day had them portaging Smallmouth Bass doing well with Zack catching a 17.5”er & then returned to Little Vermilion Lake to catch some nice Northern Pike. Both had another great trip full with father & son memories & hope to return in 2014.

Paul Miller from Kearney, NE was visiting us for his 1st time. 1st day Paul caught some nice Northern Pike and had many follows. 2nd day he had fun catching some Northern Pike and landed a 32” Muskie, his first ever. He also did a great job of taking video of his catch. 3rd day brought on a severe cold front with heavy rain and after catching a few Northern Pike Paul called it quits just before noon, had lunch and took a long nap. 4th & final day Paul caught his 2nd Muskie along with some nice Northern Pike. The story of the day was when he hung a retro lure in a tree, which was given to him by Bill Milburn below called a Woods Doodler. In an attempt to retrieve the lure he got 4 others stuck so he came back to the lodge & had to borrow my tree limber to get this very special out of circulation lure. Another guest, Bill Goodwin above, was kidding Paul about his new Nebraska fishing rod. Paul had a great time and we hope to see him back here with his best fishing buddy, his son.

Grandfather Jim Herndon with Grandson Benjamin were fishing at Fireside Lodge for there 1st time. 1st day they caught a few Northern Pike & Smallmouth Bass. 2nd day was off to a Northern Pike portage lake. & had a ball catching 26 Northern Pike. 3rd day they portaged trying to catch Muskie but the Musky just were not cooperating. It was not for lack of effort as they fished hard all day having a few follows. That’s Muskie fishing for ya. 4th & final day was planned for fishing the upper arm of Little Vermilion Lake so the could view and eagles nest and spend some time at Twin Falls. They did exactly that plus caught some nice Northern Pike & a few Smallmouth Bass. Great memories made between Grandfather & Grandson & thanks for choosing Fireside Lodge to spend special time together.

Father Bill & son Ben Milburn from Conway, AR were fishing in Canada & at Fireside Lodge for their 1 st time. 1st day they caught a dozen Smallmouth Bass, 2 Pike & Bill caught an 18.5” Trophy Smallmouth Bass. 2nd day faced with a severe cold front & heaved rain they still caught 10 Smallmouth Bass & Ben landed the fish of his life & his 1st Muskie ever measuring at a huge 42.25”.  WOW, what a great fist Musky catch. 3rd day they had a BIG day catching 32 Smallmouth Bass & 3 Northern Pike. 4th day was a very large day literally as Ben caught a 35.5” Northern Pike and a Master Anglers Award Muskie measuring 44.5” along with a bunch of other Pike. WOW, these are two guys that never fish for Northern Pike or Muskie.  When you think things could not get any better the 5th & final day proved to be spectacular as Ben hooked & landed a GIANT 43” Northern Pike. The unfortunate happening was after measuring this Pike as Ben was about to lift it up, the fish gave a violent surge and jumped clear over the side of the boat & darted off. Great Memories & Great fun had by this father and son & thanks for choosing Fireside Lodge for you first Canadian Wilderness Fishing Adventure.

Make sure to go to our website listed below to see some GREAT Fish Photos. For Fabulous Fishing Video, Wildlife Events, and Current Happenings go to our Social Sites Below.
Facebook 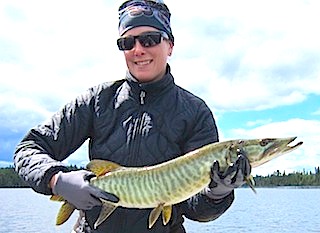 Posted by Alan Brandys/Fireside Lodge at 4:37 AM