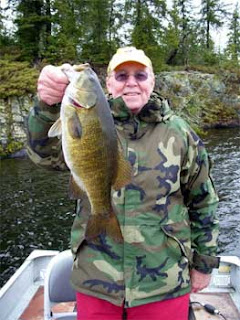 Hello from Fireside Lodge in Northwest, Ontario, Canada. This week air and water temperatures stayed colder than normal with most days having highs in the low to mid 50’s and a few barley reaching 50 degrees, with one day reaching 60. Water temperatures in most of the lake were still in the mid to high 40’s with very select shallow areas getting up to 50 for brief time periods on a few of the warmer days, only to be cooled down during our frosty nights. Water levels are remaining high, and I anticipate it to be a while until we reach normal water levels.

Bill Stayer from New Freedom, PA was making his seventh consecutive trip to Fireside Lodge. His first four days were spent fishing with another Fireside Lodge guest, Frank Hazzard, and the first day they caught 16 nice size Pike with several being 36 to 37-inches and 23 Smallmouth Bass. The second day they caught 22 Smallmouth and 9 Pike and Frank caught a 34-inch Muskie, but lost a BIGGIE Pike estimated at 42-inches or better. Third day these two beat up o 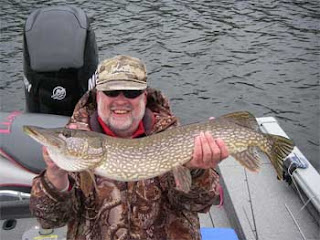 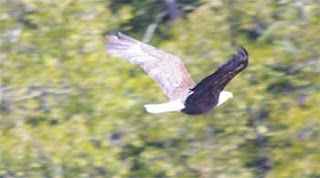 m Mount Joy, PA were back fishing at Fireside Lodge to catch Smallmouth Bass and Northern Pike. First day fishing was active as they saw 25 to 30 Northern Pike chasing their lures, landing a few and seeing some MONSTERS. Second day was cold, rainy, and wet, a Pike fishers dream, and they caught a bunch of Northern Pike turning yesterday’s follows into today’s catches. Most Northern Pike caught were larger up to 36-inches, and fat. Third and final day was a fabulous day as they caught a lot of BIG Smallmouth Bass and Northern Pike. Both Andrew and Doug caught 18-inch Master Anglers Award Smallmouth and Doug landed a hog measuring 19.5-inches. They caught a lot of 30-inch plus Pike and Andrew caught several in the mid to upper 30-inche range and lost two near and over 40-inches. Great finish to a father and son three-day fishing trip.

Third time return guests, Max and Jeb Terrien from Littleton, NC got started quickly catching some nice Smallmouth Bass within a few hours before supper and Max recorded an 18-inch Master Anglers Award Smallie. First day had these two catching toothy critters, but were mostly chasing some big fish that would not cooperate. Second day was cold, rainy, wet and the fishing moods wee similar to the fishers, negative. Third day started cold, rainy, and wet, but improved by early afternoon giving way to sunshine and warmer temperatures. With this fish activity increased as Northern Pike became much more cooperative and Max lost a HUGE Pike as the fish just kept taking line, which finally snapped. Well, it’s always better to have the opportunity and loose a big fish than never to have the opportunity. On their fourth day they decided to go to a portage lake and they had a fabulous day wearing themselves out catching over 100 Northern Pike. Their last two days were spent chasing Northern Pike and they did catch some nice Pike. While fishing for Northern Pike and Smallmouth they also caught about 6 nice Lake Trout most over 30-inches. 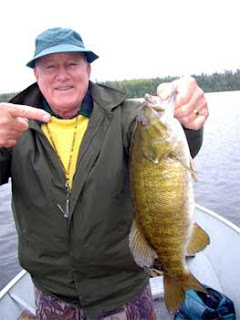 Catching Lake trout in shallow water tells you how cold our water is, as Lake Trout can only survive in cold water and go deep as the water warms. The Lake trout fishery is currently closed, however in the spring when the water is cold they will be shallow, spread out over the entire lake, so running into then when fishing for Northern Pike and Smallmouth Bass is unavoidable. Max left telling me he had a great trip, enjoying spending time and having wonderful conversation with his son, which happens seldom in their busy lives. Good for them they took special time together.

Brothers Sandy and Ted Holdahl from Clarksburg, MD and Lake Quivira, KS were fishing at Fireside Lodge for their first time. First day they did great catching 9 nice Smallmouth Bass, 5 Northern Pike and Ted caught his first ever Lake Trout, a big 28-incher. Second day was a slower day catching 5 Smallmouth bass and one Northern Pike. Third day was very good catching 10 sizable Smallmouth Bass several Northern Pike and another 28-inch Lake Trout. Their fourth and final day had them catching 13 Smallmouth Bass, Sandy catching an 18.75-inch Master Anglers award Smallie and Sandy caught his first Lake Trout ever. Sandy and Ted had fun just spending time together as brothers making the four days of fishing go by quick. Both left very satisfied but wishing they had one more day. Don’t we all at the end of a fishing trip. 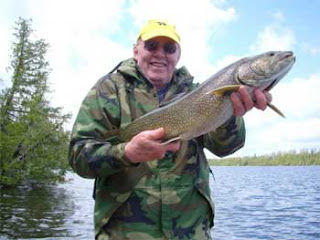 Posted by Alan Brandys/Fireside Lodge at 6:35 AM