This week started off cool, not new news, reaching only the very low 50’s on Saturday but the forecast had us warming up to the mid 60’s with sunshine by Monday and slowly creeping up to the high 60’s by the end of the week. As usual the weather service was not exactly correct as we struggled to get into the 60”s and we did have more rain during the week. 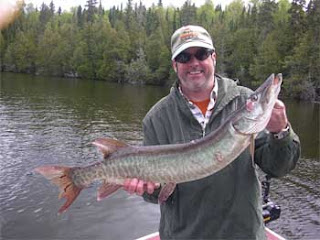 The F-Troop, named after the 1960’s slapstick comedy TV series was back for their ninth consecutive year. This year was a smaller group consisting of Fred and Matt Shadrick from Troy, MI and Hingham, MA, Rob Gall from Danville, CA and Clark Benton from Grand Rapids, MI.
As usual they arrived with bells on and presented Audrey and I with a huge banner congratulating us on our 20-year anniversary as owners of Fireside Lodge. We hung it in our dinning room near the F-Troops table for all to see. Despite the cold rainy weather they caught fish every day, and Robert in his four days left in the lead for the group fishing award having landed two Muskie measuring 34-and 38-inches. He also is in the lead for their famous foul up award as when picking up his tackle box after catching a Muskie, excitement took over and he for got it was open and spilled all his tackle into the lid of his tackle box. Being the good friend Clark is he took a picture to show us all. Fourth day was very good fishing for Rob and Matt as they caught a lot of Smallmouth and Northern Pike, Matt catching a fat 35-incher, finishing Rob’s last day with an bang. Fred and Clark also had a grea 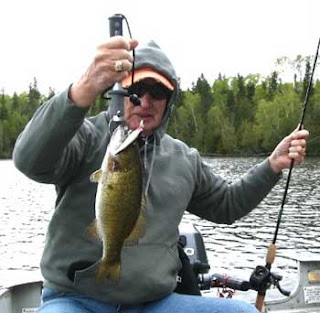 Jack and Dorie Hires from Valparaiso, IN returned to Fireside Lodge so Jack could apply his fly fishing skills once again. Jack and Dories are long time Fireside Lodge guests since 1995. When Jack and Dorie are here there is no lack of conversation and Audrey and I spend at least an hour or two having interesting discussions. With Jack and I it is usually, on second thought almost always, about fishing, and Dorie and Audrey talk about???? Like I said Jack and I are busy talking about fishing. The first day was very cold and rainy so Jack and Dorie stayed back in the cabin to relax read and watch the Hummingbirds by the feeders we have at each cabin. Second a third day were cold, rainy and windy which does not make for good fly fishing conditions, however they did catch a few Smallmouth Bass. Fourth day was a very good day as Jack caught big Smallmouth Bass and in the process hooked and landed a 35-inch Muskie. Earlier this week Jack and I were discussing the value of the color pink in lures, so after a time period of low fish activity Dorie told Jack that she did not blame the fish for not being attracted to his lures and he should use something more colorful. Jack thought back to our conversation earlier in the week and pulled out a PINK spinner. The very next cast Jack had the 35” Muskie on and landed. Dorie is Jack’s secret to his success in fishing. At the supper table that evening Jack’s reply to me when I asked how the day went was “Think Pink”. Jack and Dorie had a fabulous stay at Fireside Lodge as we did having them. 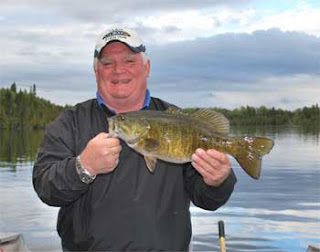 Long time Fireside Lodge guests Ken and son Kenny Heflin from Elmhurst IL and Anthony Miceli from Villa Park, IL were back to hunt their favorite species, Smallmouth Bass. On their day of arrival they had great fishing catching 21 nice size Smallmouth Bass, 14 to 17.5-inches before supper. After supper they caught 10 more big Smallmouth and Anthony set 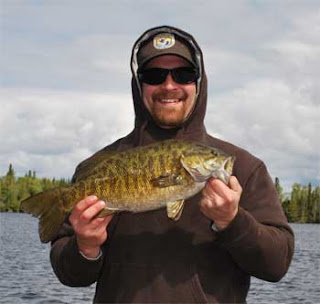 the pace by catching a Master Anglers Award Smallmouth measuring 18-inches. Kenny also caught several 17 to 17.5 inch Smallies. First day of fishing they caught many Smallmouth Bass and again some in the 17 to 18-inch size range and Kenny landed a hog 19.25-inch trophy Smallmouth. Ken said the young guys were beating him up as they were catching most of the Smallmouth Bass, which is their preferred species, and Ken seemed to be catching Northern Pike using similar lures. Second fishing day they did great catching about 20 Smallmouth Bass and 15 Northern Pike, while fishing for Smallies. The majority of the Smallmouth were big, from 15 to 17.5-inches. Third day had them making contact with some toothy critters that mostly teased them with follows, but Anthony managed to hook and land his first Muskie. Later that afternoon they caught some Smallmouth Bass and in the evening both Ken and Kenny caught Master Anglers Award Smallmouth, with Ken’s being a monster weighing 19.25-inches with a very wide girth. Fourth day was great as they caught a lot of Smallmouth Bass and Kenny hooked a 37-inch Muskie on light line with no leader and played it just right by giving the fish all the line it wanted while back reeling. Kenny caught the Muskie after a 20-minute battle. The fifth and final day was full of action catching Smallmouth Bass and Northern Pike, Two more Master Anglers Award Smallmouth were caught and Kenny landed a Monster over 19-inches. On their last evening after supper it was decided that top-water would be the lure/presentation of choice. When returning that evening they were full of smiles and stories as they had about 30 blow ups on their surface lures, and landed 6 big Smallmouth Bass. Kenny made it interesting as after hanging his lure over a tree limb near the water a Smallmouth hit it as the lure was dangling and ticking the water. To get the fishing they had to go in and get it as it was flopping just above the water. With that said these three went home full of fishing stories and wonderful memories. That’s what fishing is all about! 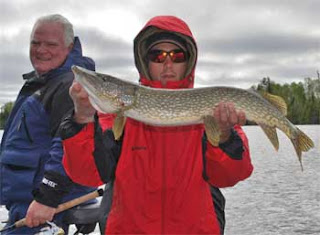 Father and sons Greg Hunter, Cole 14, and Chase 8, from Appleton, WI were fishing at Fireside Lodge for their first time. First day out Cole and Chase both caught some Smallmouth as they each landed Smallmouth in the 15 to 16-inch range. They also had a great day on the water as it was a beautiful day and enjoyed the other benefits of fishing in a wilderness area. Chase was able to take some great photos of a Great Blue Heron and a Loon sitting on her nest. Their 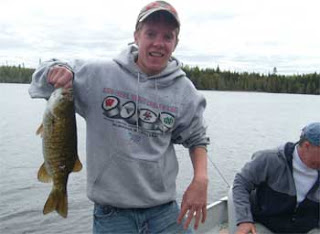 evening time enjoyment involved time spent in the main lodge playing board games in our new area dedicated for board games and quiet activities.
Second day was slower as a cold front with wind and rain took its toll on the fishing and the fishers. Third day was much improved weather being warmer, overcast with light rain on and off, and very calm. And the fishing action was great as the two boys caught Smallmouth Bass and had a lot of Northern Pike action. Great fishing story was as Greg was teaching Cole to work the lure I had sold them, Greg left his in the water and it sunk a few feet down. After Coles instructions were over Greg’ went to lick up his rod and noticed a Muskie had it’s nose an inch away from his X-Rap. Every time Greg would twitch the lure the Muskie would dart at it and stare it down. After about a minute of this the fish swam away and left Greg and his sons with a wonderful fishing memory. These three had a fabulous time fishing together making priceless memories to last 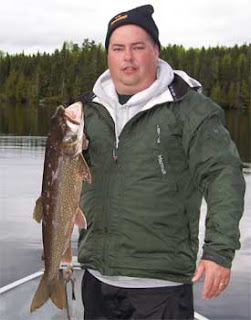 By referral, Steve Tarrence from Hallsville, MO and Dyarl Lewis from Columbia, MO found themselves fishing at Fireside Lodge for their first time. While fishing only for a few hours on their day pf arrival they caught several Smallmouth Bass, a nice Northern Pike, and Dyarl lost a GIANT Smallmouth Bass. When it hit and took off Dyarl said it felt like a Pike so he told Steve to get the fish cradle. Well, as he got it near the boat, realizing it was the Smallmouth of his life, Steve tried to get the net but he fish shook it’s head at the boat and got off. Great Start. First full day was cold and very windy with some rain, and despite this they caught some nice Smallmouth Bass, Steve’s largest being a 15-inch Smallie with some girth, and Dyarl caught a 17-inch and a Master Anglers Award Smallmouth measuring 18-inches. Dyarl also caught a nice size Pike. Second day these two had a lot of action catching both Smallmouth Bass and Northern Pike. Also, while fishing after supper, Steve landed a big Lake Trout estimated from the photo to about 30-inches. Steve was so happy and excited he forgot to measure the fish after Dyarl took the photo. Third day these two did great catching 30 Northern Pike and 6 Walleye between 20 to 23-inches. They had such a good day I found them sprawled out on the two lazy boys in the lodge just admiring the fabulous view of Little Vermilion Lake. Fourth and final day was terrific as they caught a lot of Smallmouth Bass, enjoyed having lunch by Twin Falls, and Steve caught his very first Muskie. It was a nice 34-inch Muskie that gave him a fight, and Steve’s big smile in the picture tells the whole story. These fellows said that their experience at Fireside Lodge was far above their expectations and hope to return in the near future. 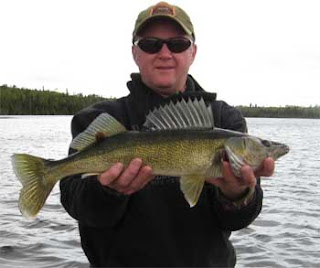 Kevin Reilly from Huntley, IL with nephew Danny Tomazin from Warrenville, IL were at Fireside Lodge for their first time based on a referral received from a previous guest of Fireside Lodge. First night on day of arrival after supper they caught several Smallmouth Bass 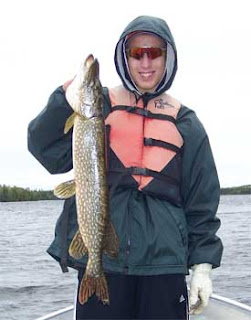 and Danny came up with a very nice Northern Pike measuring 33-inches. First full day of fishing was met by cold front conditions with wind and intermittent rain. They still caught some fish and Danny came up with another nice Northern Pike at very heavy 29-icnhes. Second day they did great catching Smallmouth Bass and enjoyed an extended lunch at Twin Falls, which is one of many natural wonders you will see while fishing at Fireside Lodge. They also had some great views of a Bald Eagle and Loons. Last day Kevin and Danny had loads of fun and Kevin came up with the catch of the day by landing a HUGE 18.5-inch Master Anglers Award Smallmouth Bass. The story of how he caught this big Smallie is worth telling. As Kevin and Danny were having lunch on shore Kevin decided to make a few casts. On his very first cast he thought he was hung up on a rock, and gave is rod a hard pull, and his lure felt stuck. As he gave another hard pull his line started to move and the big Smallmouth started to fight. These two had a fabulous trip, made wonderful family memories together and Kevin gets the Uncle of he year award. 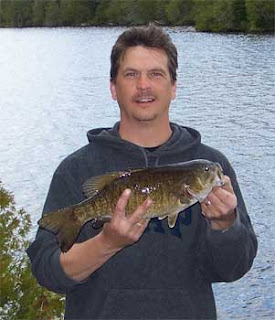 Catches of the Week: 19.25 and 19-inch Smallmouth Bass, 38-inch Northern Pike, 30-inch Lake Trout, 38-inch Muskie
Please note that we have a “NEW” email address below.

Posted by Alan Brandys/Fireside Lodge at 4:27 AM