Global Warming??? Surely not at Fireside Lodge as this week started with waking up on Saturday morning to 30 degrees Fahrenheit, cold winds from the north and a predicted high of 45 degrees, despite being a sunny day. Normal temps for this time of year are 68 for a high and 45 for a low. 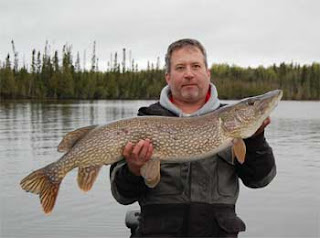 For the second consecutive year Dan Garry from Willoughby, OH headed a mostly Ohio based group including brother Tim from Mt Guild, Neil Newman from Mentor, Roland Reed from Madison, David Caldwell from Cuyahoga Falls, Rodney Dennison from Kirtland, John Molnar from Willoughby, Willard Raymond from Geneva, and Dan Smierciak from Gainsville, FL. Most of this group fly fishes and some use fly-fishing techniques only. On their day of arrival, just 1.5 hours before supper, most of the group caught Northern Pike and a few Smallmouth Bass. After supper fish were caught with Dan Garry setting the pace landing a HUGE 39-inch Northern Pike on a fly rod fishing with a red and white streamer fly. First day was tough for any fishing technique and extremely tou 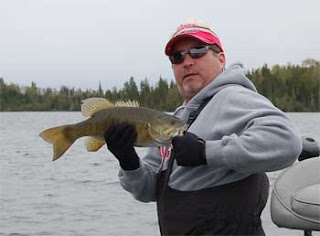 gh for the avid fly fishers of this group. It was cold and very windy, and despite these conditions they found plenty of fish, and many big Northern Pike. Getting them to strike was another story. Roland seemed to land the most being a 9 fish combination of Smallmouth and Northern Pike. Second day the winds calmed but the cold rain came, temperatures staying about 39 degrees Fahrenheit all day, and we also got periods of wet snow. The whole group caught fish with Tim and John having a great day fly-fishing, catching over 50 Northern Pike. Their third and final day was “FABULOUS” with Tim and John catching 30+ Northern Pike fly fishing, Roland and Neil caught 60 to 70 Northern Pike, Roland only fly fishing. The fish were so feisty that a Pike actually broke Roland’s fly rod. Neil’s parents owned a fishing lodge in Canada, and he had the wonderful opportunity of growing up at a fishing lodge. With this said, Neil told m 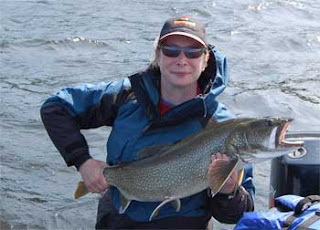 e that this was the best day of fishing he ever had, and was very excited with all of the Northern Pike action him and Roland experienced. Dave and Rodney had a great day catching 33 northern Pike and Dan G with Dan S had less numbers, but caught a dozen bigger pike. Willard spent the day back at the lodge reading and hiking near the lodge. One trail he was on brought him to a back swampy lake that holds a lot of wildlife. Willard saw Moose tracks on the trail and he was in awe seeing the biggest beaver dam of his life. Terrific fun was had by all on their traditional three-day annual fishing trip. Hope to see this crew back in 2010.

Long time return Fireside Lodge guests Aaron and Michele Hayes from North Aurora, IL were back fishing at Fireside Lodge for their tenth consecutive year. Despite a very cold 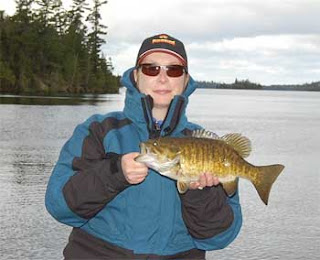 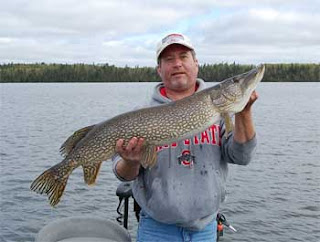 suring 41.5 inches. The forth day of fishing was fabulous, catching 48 big Smallmouth Bass, 8- Northern Pike, and a Muskie. Aaron managed to catch four Master Anglers Award Smallmouth Bass on this day and Michele caught a few in the 17.5-inch range. WOW! That’s great fishing and catching. The fifth day was very windy, but by using the wind to their advantage, and fishing wind blown points they had very good action catching 20 Northern Pike 30 to 35-inches, 8 Smallmouth Bass, and Michele caught a very large 34-inch Lake Trout. They also mentioned that they lost as many Pike as they caught because of the extremely windy conditions. On their sixth and final day Aaron and Michele finished strong, even though they came in for a four hour nap in the middle of the day, catching 24 BIG Smallies, 9 Northern Pike, 1 Muskie and 1 Lake Trout. Each caught a Master Anglers Award Smallmouth, Michele’s at 18.25-inches and Aaron’s was a huge 19.25-inches. They ended up with 11 Master Anglers Award Smallmouth, and two Masters Northern Pike with many of the other Smallmouth just missing the mark, and many of the Pike being in the over 30-35-inch range. The good news for Aaron and Michele about this fishing trip ending is that they are returning for a second fishing trip to Fireside Lodge in September.

Father and son Dick and Rick Kile from Schnecksville, PA and Arlington Hgts, IL were returning to Fireside Lodge for their second time. First day of their three-day trip they had fabulo 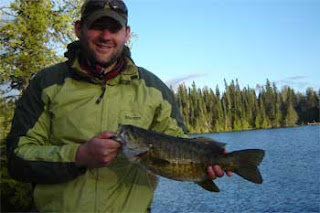 us fishing, catching 27 Smallmouth Bass, with most being larger, and Kile landed two huge 17.5-inch Smallies. Second day was a tougher weather day with cold high winds, but they still managed to catch 14 nice Smallmouth Bass, several Northern Pike and Dick lost the fish of his life. After hooking the monster he got it near the boat, where both him and Rick got a good look at it, then the fish took off running and fighting so hard that Dick’s rod was jerking back and forth. As Dick was holding on just trying to keep the fish under control, the pressure on his line was too much and it did break off. Dick told the story in the dinning room with passion and excitement, all the time smiling ear to ear. Soon after he lost the big fish, Dick hooked another Northern Pike whose sudden burst put his reel into a birds nest, but between Dick’s persistence and Ricks hand lining they managed to land the pike. These two stories will be in Dick and Rick’s memory bank for a long time to come. That same evening after supper these hardy souls went out to brave the still cold wet weather, and were rewarded with Rick catching a few very large Smallmouth, one being 17.5-inches and another tipping the ruler qualifying as a Master Anglers Award Smallmouth measuring 18.25-inches. Third and final day was a portage day as they walked through a bush trail to fish for Northern Pike, and that’s exactly what they caught. The Northern Pike fishing was fast action and fun as Dick and Rick combined for 32 Northern Pike, and Rick came up with a nice size Walleye. Great finish to a wonderful father and son trip where many memories were logged. Thanks for choosing Fireside Lodge to make those priceless memories. 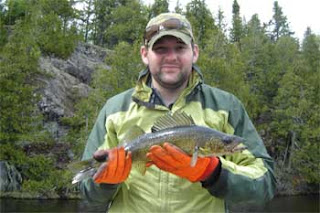 Posted by Alan Brandys/Fireside Lodge at 4:12 AM