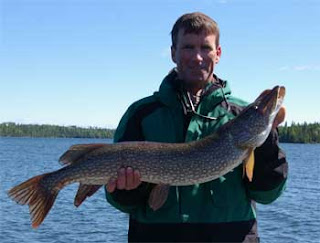 Hello from Fireside Lodge in Northwest Ontario, Canada. Our second week was similar to the first having above normal temperatures and getting some well-needed rain. In fact the rain we received brought our lake levels up to only a foot below last years spring levels. At the beginning of the week water temperatures were high enough for Smallmouth Bass to start making their spawning beds, and before weeks end were spawning on most sections of Little Vermilion Lake. A huge highlight of this week was a FABULOUS video of a Moose swimming across the lake take by Frank Hazzard from Arlington, TX. The previous week he also took an equally FABULOUS video of a Bald Eagle swooping down and snatching a fish out of the lake and flying off with the fish. Both can be viewed on our YouTube channel at http://www.youtube.com/user/FiresideLodgeFishMake sure not to miss these GREAT videos. 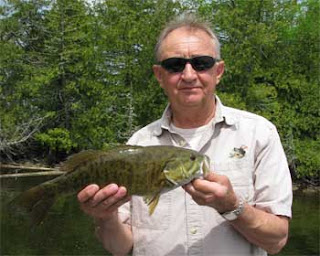 Tony and Judi Majcher from Hawthorne Woods, IL were here for a few more days during this week finishing up their 7 might 6 day stay with us at Fireside Lodge. During these few last days they continued to catch some nice Smallmouth Bass, and Northern Pike with Judi landing another nice Pike measuring 33- 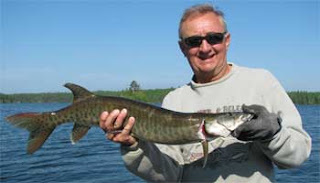 inches and Tony managed to land two Muskie both measuring 34-inches. To read about their first four days see our fishing report from 5/15 to 5/22 on our website listed below. In all they landed 89 fish during their stay and made memories that will last a lifetime. Tony and Judi had a fabulous time hating to leave, and sent us a very nice email expressing their gratitude. This is a quote from just a part of that letter that explains their fishing experience in a nutshell. “I know I have said to you that all fishing trips are great, but some are greater than others. I have to say, this one was in the greatest category. I have to give Fireside a 10 plus rating across the board - this includes the weather. We both really enjoyed ourselves.” It is always great to get feedback like this and we hope to see Tony and Judi in 2011. 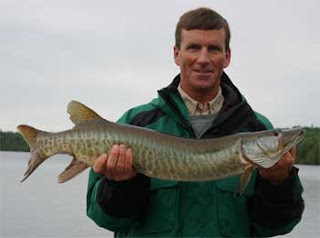 Third time return guest Max Terrien along with first timer Ed Sever both from Littleton, NC were anxious to get on the water. They must have known the fish were waiting for them as the first day out they caught a bunch of Northern Pike, Max landing a nice 37-incher. Second day was more of the same catching many nice Pike up to 35 and 36-inches. Their secret bait was and old standby lure the #13 Original Floating Rapala. They were also doing well with a Sassy Shad fished on a jig had. As the fish tore their lures up Max visited my tackle shop to replenish several times. Their last three days were more of the same with some hot and cold streaks making us feel good about ourselves for a while and then humbling us. Fish and fishing tend to do that to all fishers. Both had a great time and we hope to see them in the near future. Thanks for coming to Fireside Lodge. 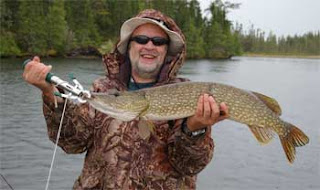 Long time Fireside Lodge guest Bill Stayer from New Freedom, PA came with his cousin Tim Stayer from Mifflinton, PA. for his first
fishing experience at Fireside Lodge.
What makes Fireside Lodge a special place to fish is how our guests have developed relationships over the years and this gives a perfect example to note. Bill and Frank Hazzard, who was written up in last weeks report and who is staying with us for three weeks, met at Fireside Lodge about 9 years ago. Every year since then they have gotten to know each other better, and several years ago started to fish together for a few days during their time at Fireside Lodge. Well, during Bill and Tim’s 8 days of fishing they fished with Frank on 7 of them, and made some great fishing memories together. Several examples of their daily catches are: 53 Northern Pike while losing another dozen, 25 Northern Pike with most being over 30-inches and up to 35-inches, 31 Northern Pike and Tim caught the Pike of his and most peoples lifetime landing a 42-inch MO 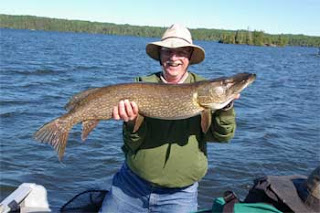 NSTER Master Anglers Award Northern Pike, 23 Northern Pike, 21 Northern Pike and a Muskie, 34 Northern Pike with Tim showing us that crazy color combinations on a lure can sometimes be affective, and 28 Northern Pike with Frank catching a Monster Pike measuring 39.75-inches. Along with all this fishing excitement they watch numerous Bald Eagles, Loons, saw several Moose and many other wildlife and outdoor experiences that are a natural site to see while fishing in the great wilderness we have to offer at Fireside Lodge. Bill and Tim went home very sad but happy to have had all these wonderful outdoor experiences. Frank will still be with us next week so his adventures will continue for your o read about in next weeks fishing report. 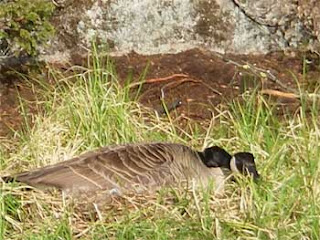