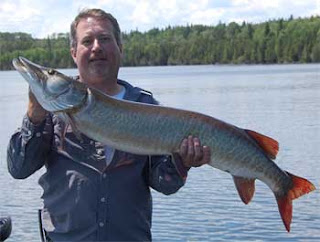 Hello from Fireside Lodge in Northwest Ontario, Canada. Our third week brought near normal temperatures with one major rain event in the middle of the week. With this came a brief cool front lasting about 24 hours. This coupled with the full moon waxing stage seemed to trigger the BIG fishing into a positive feeding mood. 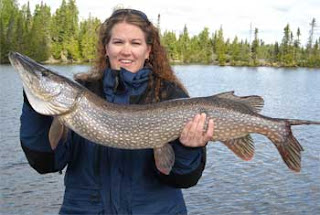 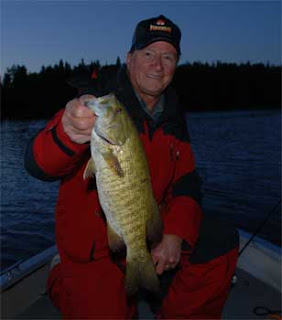 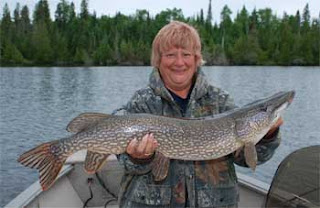 suring 40-inches, Scott caught a 41-inch Pike, and Diane caught the biggest Northern Pike of her life landing a very BIG 37-incher. Larry also caught some nice Pike and Smallmouth Bass. All left sad that their trip was over but thrilled with the time they enjoyed together at Fireside 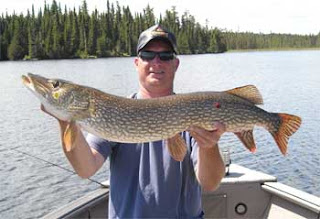 Making their first fishing trip to Fireside Lodge were Roy, Kevin, and Drew Cartwright and very good friend Bob Bellatti all from Afton, OK. Audrey and I felt privileged that these four drove all the way from Oklahoma to visit with us for three days of fishing. First day Roy and Kevin did very well catching 9 northern Pike and 13 Smallmouth Bass, and Roy mentioned how impressed he was with the size of our Smallmouth. Second day was even better as Roy and Kevin caught more fish landing a 5lb plus and several 3-4lb Smallmouth Bass. Very good seeing it was their first trip to Fireside Lodge. Last day had Drew written all over it as he caught a bunch of Northern Pike in the 30 to 36-inch range, all with lures purchased at my tackle shop. Trip too short? YES! Trip worth it?? DEFINATLEY!!!! All had a great time and invited Audrey and I to Oklahoma to do some Crappie fishing. Hope we can make it some day. 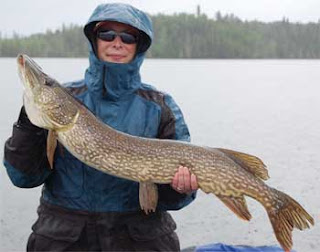 Aaron and Michele Hayes from N Aurora, IL returned to Fireside Lodge for their 11th consecutive year and 16th time. These two had nothing less than a FABULOUS fishing trip. Focused on toothy critters they caught just that, landing many big Northern Pike and Musky along with some GIANTS. Day of arrival they caught 25 Northern Pike having four doubles, and Michele landed a HUGE 41.5-inch Muskie. First day they caught 33 fish, Aaron landing a 35 inch Pike and 35 and 30-inch Muskie. Second day was a short day fishing only until 3 PM catching 35 Northern Pike and Aaron landed a 39-inc 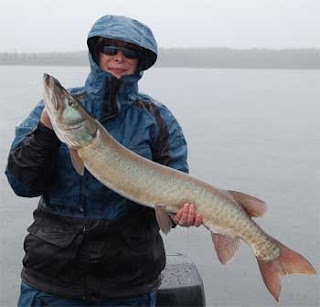 h Pike and a 39-inch Muskie. Another day had them catching 26 Northern Pike and 3 Muskie, with most over 30-icnhes up to 37-inches, Michele caught a Tiger Musky, and Aaron came up with the catch of the day and week landing a GIANT Master Anglers Award Musky measuring 46-inches with a huge girth. The last day was pretty special not only catching many Northern Pike but both Aaron and Michele caught Master Angler Award Northern Pike. Michele landed a very large 42-incher and Aaron caught a MONSTER measuring 44-inches, and both were wide bodied Pike. See fabulous photos of Aaron and Michele’s catches on our website listed below. Both had another fabulous stay with us at Fireside Lodge. 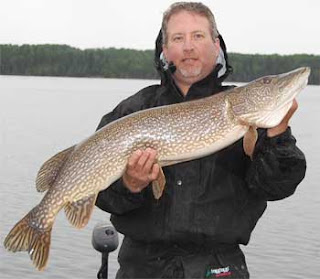 Jerry and Wanda Miller from Erwin, TN made their first trip to Fireside Lodge of 2010 and have been fishing with us every year since 1995, coming twice for many of these years. This was the first of two trip 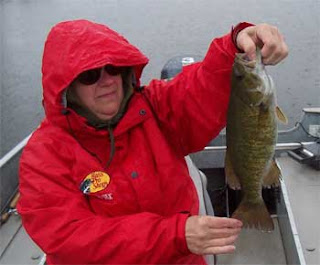 s in 2010 and they did not waste any time catching fish, landing 22 Northern Pike and 2 Smallmouth Bass between 2:00 and 4:30 PM on the day of arrival. First full day of fishing they caught 28 Northern Pike and 17 Smallmouth Bass with most of the Pike between 30-35-inches, and Jerry lost one that seemed to be 38-40-inches. Next day they caught 24 Smallmouth, all between 15-17-inches and were in before 1:00PM to get out of the rain. Third day had them catching 16 nice Smallmouth before noon and spent the rest of the day relaxing and staying dry. On their fourth and final day they finished strong catching 36 Smallmouth Bass, several Northern Pike, and Wanda hooked a nice 34-inch Muskie. Both had a fabulous stay and thoroughly enjoyed the Hummingbirds coming to the feeders, which we place, on every cabin deck. We will look forward to seeing Jerry & Wanda again in July. 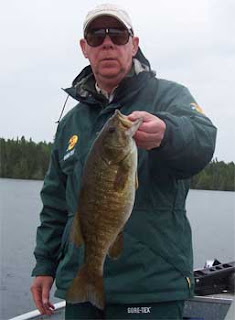 Frank Hazzard from Arlington, TX finished up his 25-day stay with us making it 20 consecutive years Frank has come fishing with us at Fireside Lodge. Frank holds the record for most consecutive year trips to Fireside Lodge at 20, most trips at 27, and the longest single trip at 25 days. Franks last week with us was pretty special as he not only caught a lot of Northern Pike, many 30 to 39-inches, but he also landed three Master Anglers Award Pike 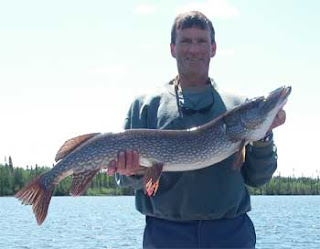 . His first was a 40.5-inch Pike, the second was huge Northern Pike measuring 43-inches, but he saved the best for last. On his very last day after fishing all week for Northern Pike he decided to fish for his favorite target at Fireside Lodge, Smallmouth Bass. He had a great day landing 61 of these fabulous fighters, but just before calling it a day/fishing trip he decided to fish for Northern Pike for his last hour. Well, the story of a 25 day fishing trip could not have a better ending than catching a MONSTER WIDE BODIED 44-inch Master Anglers Award Northern Pike as his very last fish. WOW!!! What a great catch. Congrats to Frank and now that he is gone the lodge and lodge room #9 feel pretty empty. 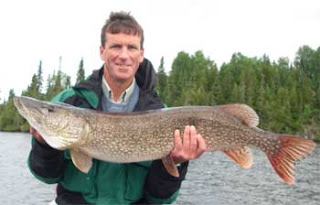