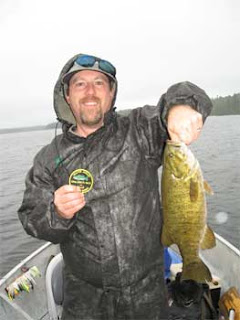 High School friends and best buddies Dan Szkola and Don Landbo from Sugar Grove and S. Elgin, IL retuned to Fireside Lodge for their 7th consecutive year. After Don left he sent me an email of his and Dan’s results. So as the saying goes this is straight from the horses mouth from Don’s letter: “Forgot to give you the results during checkout-I had not been that tired since my Basic Training days. We really went at it hard again for two old guys. Thur-14 SM and 3 NP to 34" between us, Fri-Blown off lake, but managed 6 SM and 4 NP between us, Sat- re 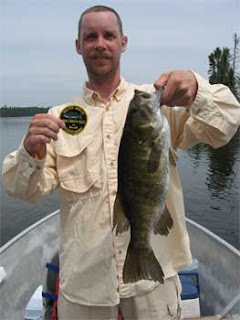 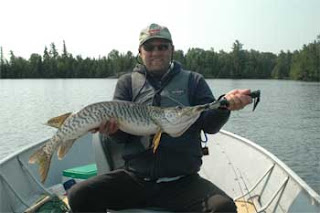 Phil Spahr from Fairborn, Oh. his sons Brad and Tim from Marboro, MA and their Uncle Jerry from WV were all back to Fireside for their 10th consecutive year. DOA and the first day they caught 20 Pike up to 34” & 18 Smallmouth Bass up to 17”. Second day was a BIG day as the group caught 148 Northern Pike & Tim landed a nice Tiger Muskie. Third day they caught 15 Smallmouth, 6 Pike, and Tim caught his second Musky, however Phil was up to his old Beatle Spin tricks as after hooking a Smallmouth a Musky decided to take it away from Phil. After the obvious struggle the Musky won and got lunch. Fourth day was a BIG catching day as they caught 77 Pike and 2 Smallmouth. Fifth and sixth days Phil & Jerry kept their num 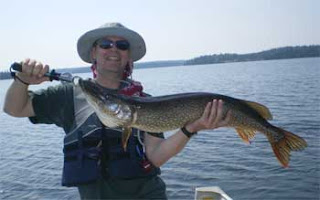 bers up as they landed 95 Pike and 5 Smallmouth and a Musky, but Tim and Brad changed tactics and decided to chase BIG toothy critters. After some discussion on lure type and a new technique they were off to test their skills. Well, the results happened on Brad’s third cast catching a BIG FAT 35-inch Tiger Muskie and they proceeded to catching Pike in the 30 to 33-inch range. Last day the did even better landing more big fish including each catching a 38” Northern Pike, Tim caught two Musky at 30 & 34-inches and Brad caught a chunker 35” Pike. This set the stage for many winter discussions in planning for their next fishing trip. This entire group caught 358 Pike, 48 Smallmouth, and 6 Muskie. Great Trip making Fantastic Family Memories!!

Tyler Tennant from TX and father-in-law Peter Higman from IL returned to Fireside Lodge for their fifth consecutive year. Always after the big fish, this year was no different. They had plenty of follows but the big boys were not cooperating as they did in previous years. Tyler and Peter caught a lot of toothy critters, mostly Pike and also caught a lot of BIG Smallies on large lures. Tyler landed the biggest of the week, a MONSTER measuring 19-inches. Both had a great time fishing together as always. 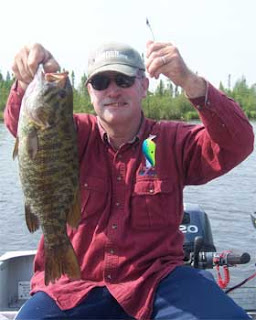 Father Paul Capecchi with son Tony returned to Fireside Lodge for their 8th consecutive year. The fishing results below were taken from notes that Tony & Paul gave to me when departing. DOA these two saw a Moose & Caught 15 Pike up to 32-inches, and what more can you ask for? First day was fabulous catching over 150 fish, Tony landing two Muskie at 31” and a Big Fat 43” Trophy Clear Musky, and a GIANT 19” Smallmouth Bass. Next day was another 150 fish day, mostly Pike, the biggest being a FAT 35-incher. Third day they were in search for Muskie only and had many follows but no takers, caught 1 large Pike, a dozen Smallmouth and one 1400LB Moose sighting. GREAT DAY!!! Fourth day had them at near 100 fish the highlight being an 18” Master Anglers Smallmouth Bass. Fifth day was over 150 fish and Tony caught a HUGE 39” Musky. Last day was over 100 fish day and Paul landed a beauty 18.5” Trophy Smallmouth and they ended their trip with a traditional double catch of Northern Pike. They had 8 doubles in all and Tony caught 7 Pike on 7 consecutive casts. Most of all they caught & kept to take with them another set of wonderful father and son memories fishing together in the great wilderness we have to offer at Fireside Lodge. 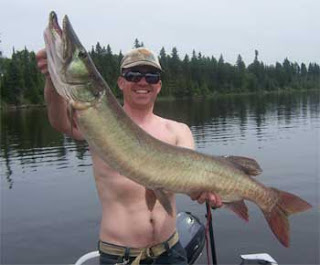 Joe & Mike Martineck from Addison & Bolingbrook, IL were fishing at Fireside Lodge for their first time. For first timers they learn fast as they caught over 100 Northern Pike on the 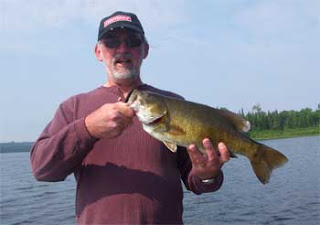 ir first day. WOW!! Second and third days were not as fast action but they did caught some quality Pike and after leaving their big net back on the dock Mike hooked into a GIANT Master Anglers Award size Muskie and had it to the boat several times and in an attempt to land this monster by putting it’s head in a Bass net and picking it up by the tail, the fish shook violently, flopped out of the net only leaving the hook behind and all Mike & Joe could do is watch this submarine slowly swim away. As for the big net, be assured they will never leave the dock without it again. Fourth day was full of action again as they landed over 40 Northern Pike. Their fifth day was a slower day, but on the sixth and final day they finished strong catching well over 50 Northern Pike, 3 Smallmouth & Joe caught a GIANT 19.5” Master Anglers Trophy Smallie. Great Fishing and GREAT Memories for this father and son. 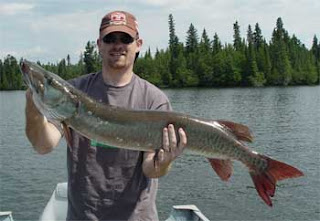 Leon Robbins from Yadkinville, NC returned for his 5th year and Justine Sebastine from Mount Holly, NC was back for his 2nd year. On their DOA while fishing for just two hours before supper they had an amazing start to their 5 days of fishing. Justine hooked into and landed a BIG 41” Musky. That’s setting the bar Justine. Next day they had a great day catching 63 Northe 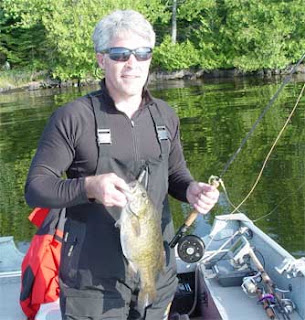 rn Pike, 11 Smallmouth Bass with two being Trophy Master Anglers measuring 18.5 & 19.25-inches. Two of there remaining four days were spent chasing Musky having lots of follows and Justine caught two more near 30-inches plus they caught 8 Pike & 20 Smallmouth. The other two days were full of catching 125 Pike 10 Smallmouth Bass with Justin also catching a Master Anglers Award Smallmouth at 18-inches and one more Musky. Both had a blast and were already discussing their plans for 2011.
Ross Lagerblade from Crestwood, KY with Father Roy from Rock Island, IL returned for their 6th trip. The day of arrival these two caught some nice Northern Pike to get started off right. There first full day of fishing they accomplished their personal best day by landing 78 Northern Pike with a bunch of other action. Second day was spent chasing Musky having some follows but no hook ups. Third day was another action packed Pike day; Ross saying his dad and him caught Northern Pike all day long. On the fourth and final day they again fished for Musky but could not get any to cooperate and caught a few larger Pike. Both left as they came, full of chatter and laughter logging another set of fishing memories made together. 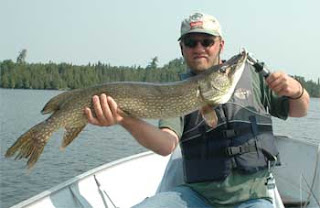 Jim Pim returned to Fireside Lodge with brother Rich, Robert Dosey, Steven Barton, Edward Prichard, & Howard Reding from Shell Knob, Carthage, Sarcoxie, Diamond, & Joplin, MO. These fellows had fabulous fishing and fun. First day of fishing was fabulous as they caught lots of Northern Pike with Howard and Steven saying that they could have caught as many Pike as they wanted. Second day Jim and Robert caught 40+ Smallmouth, Robert landed a Master Anglers 18.5-incher, & a Musky each, Howard and Steven said they were wore out by suppertime catching Smallmouth and Rich and Ed caught just as many. Third day was another fabulous Pike day as each boat averaged 75 Northern Pike, and Rick had the catch of the day landing a BIG FAT 42.5” Tiger Musky. Fourth day was another great Smallmouth day with each boat catching 35-45 per boat. Fifth and last day they all had another great Pike day catching many pike in the 26 to 32-inch range. All left having a fabulous time and after they left we missed the laughter and fun coming from their dinning room table.

The Scott family group was back including Ewell, Ed, Greg, Brian, Guest of honor Earl and Tom Carew, Charlie Tingle, and Troy Burchett. They came from KY, OK, IL, and NC to celebrate a very special 97th Birthday for Earl. When Ewell asked his dad Earl what he wanted for his 97th birthday he replied, “I’d like to go back to Fireside Lodge”, where Earl has celebr 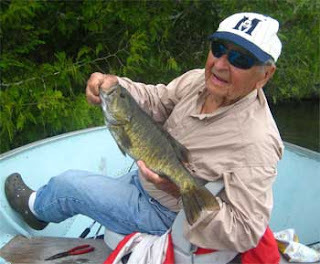 ated his birthdays of 89,90,91,92,93,and 94. First day out they averaged 35-40 Smallmouth per boat and that’s 140-160 for the group. Great Day. Second day Greg & Earl caught over 35 Smallmouth with Earl landing an 18” Master Anglers. Master Angler at 97 is a remarkable fishing feat. Ed & Brian caught 25 Smallmouth and 37 Pike, and Charlie, Ewell, Tom, & Troy all caught a bunch of Pike, 60-70. Third day was Ewells 70th B-Day and congrats to Ewell. He was fishing with Tom and the caught a lot of nice Pike and Tom had a 40-inch plus Pike near the boat. Charlie and Troy caught over 40 Smallmouth, and Earl while fishing with grandson Brian caught 40 Smallies himself along with another 18” Trophy Master Anglers Award Bass. Fourth and final day was another great day in several ways. First the whole group caught a lot of Smallmouth Bass with Ed, Troy, and Brian all coming away with Master Anglers Award Smallmouth Bass 18 to 18.5-inches. Also, we had a terrific celebration in the dining room for Earls 97th birthday. The cake was a very BIG traditional birthday cake with a fishing theme and it said “Happy Birthday Earl – Master Angler at 97”. Everyone, 48 people in all, sang to Earl and it was a very joyous and memorable event. Audrey and I were 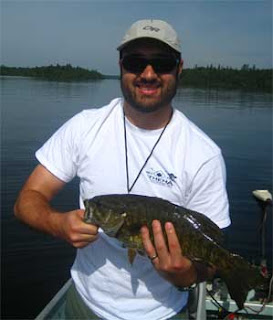 very fortunate to have Earl want to spend his birthday with us at Fireside Lodge. To see this event go to our Facebook or YouTube links. Enjoy. Earl is truly an inspiration to us all.
John Budin returned to Fireside Lodge with friends Jerry Sullivan, Bob Gabrielsen, and Bill Foreman from Arlington Heights, Highwood, & Johnsburg, IL. Very first day these guys caught many Northern Pike, so many they lost count. Second day was slower, but the third day was another GREAT day fishing & catching Pike & Smallmouth with Bob catching an 18.5” Master Anglers Award Smallie. Their fourth and final day was another very active day catching a lot of Northern Pike and some nice Smallmouth. All left having a blast and with big smiles after having some down time in the wonderful wilderness we have to offer.

First timers to Fireside Lodge were Rich Canada, Ron Arnold, & Bob Ayotte from Johnstown, OH, Commerce, MI and Waterford, MI. These guys were here for the BIG toothy critters we are known for and on their first day they caught some Northern Pike, but they were very surprised at the number of BIG Pike and Muskie follows they had. So we discussed techniques and tactics to turn some of these follows into catches and they were off to apply their skills. Well, things worked out very good as they caught a lot of Pike and Ron ended up taking a picture with one of those big follows as he caught a Trophy Master Anglers Award 40-inch Northern Pike. Their third and final day brought them more BIG Pike caught and had some of those big Pike & Musky follows. All had a great time fishing together at Fireside Lodge. 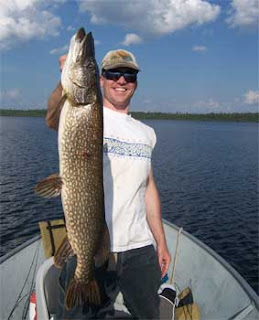