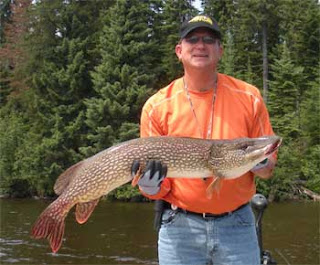 Hello from Fireside Lodge in Northwest Ontario, Canada. This week’s weather brought us some much-needed rain but too much too fast as it rained 1.5 inches within 8 hours. The rest of the week was up and down have temperatures anywhere from the 80’s to 59 for highs. 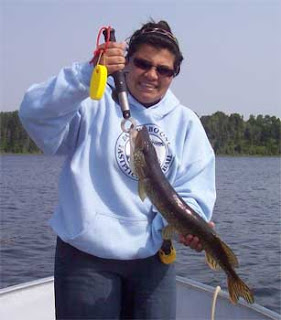 f arrival they wasted no time going out and catching some Northern Pike & Smallmouth with Andrianna catching her first ever Pike. Second day was terrific as Chuck landed 35 Northern Pike himself, and the group accounted for well over 100. Second day was a half-day for Muskie fishing on Closs lake and half day Smallmouth Bass fishing. Closs produced in the ways of huge Musky follows, however hooking one proved to be a challenge. They did catch Smallmouth, a few Pike, and had a fun day on the lake. Third day brought heavy rain and colder air, which kept the kids from fishing but gave Tom and Chuck the rare opportunity to fish together. They decided to try for big toothy critters and after some map discussion were off to carry out there plan. Well, they had success fishing deeper rock structure areas near weed beds and caught some bigger Pike. Fourth and final day was going to be a numbers day for a big finish but the youngsters decided they would rather fish for big fish. Success was achieved as they went out and caught about 12 bigger Pike, and Chuck and one on that took him all over the place with a strong run and the head shaking all the way. Also, Stephen caught some nice Smallmouth Bass. All left with another set of GREAT family fishing memories. 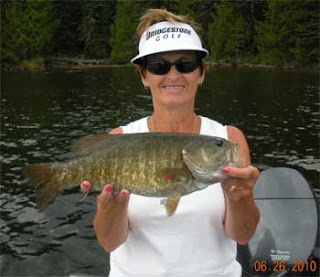 Guests since 1995 Paul & Martha Weaver from Princeton, IN returned with their two grandsons James Paul Cole, & Matthew Whitter. After catching some nice Smallmouth and a few nice Northern Pike on their day of arrival, their first day was full of Northern Pike action catching about 30 and Paul came up with a BIG 40.5-inch Master Anglers Award Pike. Second day was spent catching some nice Smallmouth and a few Pike. Third day brought very heavy rain and cold front conditions, which limited time on the water to just a few hours catching a few fish. Fourth day had them having a blast landing 41 Northern Pike on a very cool 59-degree day. Fifth and final day was a great finish as they all had a ball catching over 40 Smallmouth Bass. All went home having another set of memories at Fireside Lodge & we thank Paul and Martha for choosing Fireside Lodge for this special time spent with their grandchildren. 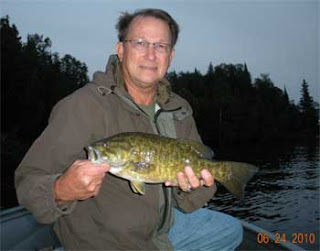 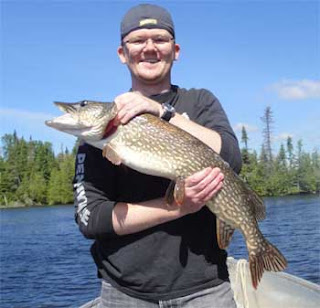 D were all back at Fireside Lodge to fish as a result of a great Christmas gift from Mark. First day was a severe rainstorm and cold front conditions, but four just six hours all 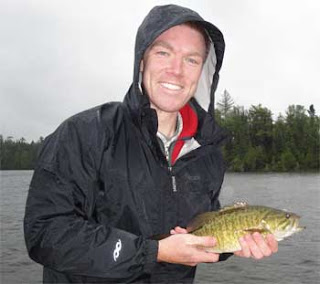 managed to catch plenty of Northern Pike and Smallmouth Bass and 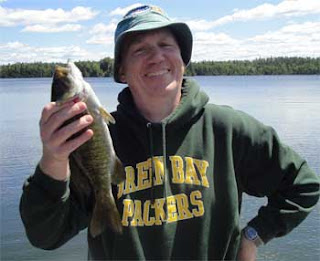 each caught some bigger fish. First two days were good as all caught Northern Pike and some Smallmouth Bass. The third day was very good catching 20 Smallmouth & over 20 Northern Pike with Joshua catching the biggest of the day landing a fat 36-inch Pike. Fourth day had them catching some Smallmouth and 12 Pike. Fifth day was fabulous as they had all day non-stop action on Northern Pike, catching them all day long. Too many to count was the consensus. This group I admired as they had fun whatever they were doing enjoying conversation among themselves and with others and you could always find them by the sound of laughter. It was very obvious the relationship between Mark and his sons is a very special one, and they all made some very special memories to carry throughout their future. 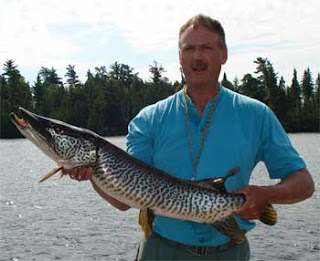 Frank and Linda Tyrrell from GA. were back to Fireside Lodge for their 7th consecutive year and on their first day of fishing the fought off the heavy rain, 1.5”, and cold front to catch a lot of nice size Pike, and Frank just missed a BIG Musky as it got off right near the boat. These two h 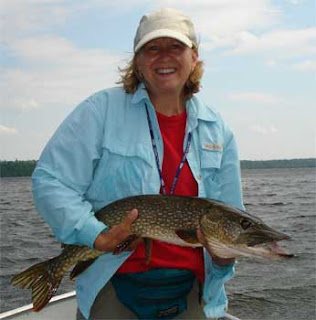 ad a GREAT week catching Northern Pike with many of them in the 26 to 33-inch range and they said every day was a good day with a few being great catching days. They ended up landing over 125 Northern Pike during their week stay and on the final day the topped it off with each catching big 34-inch Pike, and Frank landed a HUGE 41-inch Tiger Muskie. What a fabulous finish to a terrific fishing trip.
Kent Williams and Bill Black from Atlanta, GA returned to Fireside Lodge for their seventh time and the first day was a tough one as hea 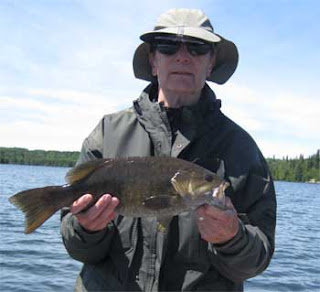 vy rains and cold front conditions cut down their fishing time but still managed a few fish. Second day they made up for the first as they caught a lot of Smallmouth Bass and from the discussion at the dinning room table Kent did better than Bill as he was using a wacky worm rig and Bill refused to use this method even though Kent offered Bill some of his plastic worms. Third day they tried to duplicate the 2nd day but not a chance as the Smallmouth Bass just would not cooperate. Bill was amazed at the difference in one day to the next while using the same technique in the same areas. That’s fishing and that’s what keeps all us fishers loving the sport. Last day was a strong finish as Kent and Bill caught plenty of Smallmouth Bass and both left as they came with full smiles, and still razzing each other. 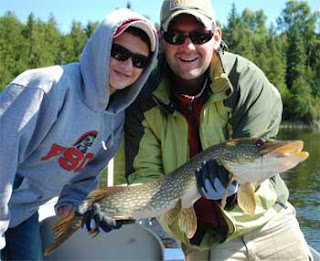 ll from Schnecksville, PA and Chicago, IL were here to fish and make family memories together. First day was fabulous despite the cold front and heavy rains as they ended up catching 45 Smallmouth Bass, several Pike, and highlights of the day were Brandon catching his first Northern Pike and landing a 17.5-inch Smallmouth, and Charlie caught two 18-inch Master Anglers Award Smallmouth. WOW!! What a great day. Second day was FANTASTIC as the group caught 76 Northern Pike and Brandon came up with the special catch of the day landing a 35” Clear Musky, which was his first Musky ever. Third and final day was back to Smallmouth fishing, catching over 30 along with a couple of Pike. For this family group the fishing was great, fun continuous, and the memories made were unforgettable and priceless. 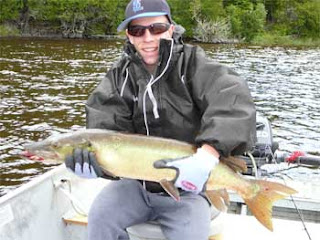 Father and son Chuck and Charles (Skip) Kauffman from Mechanicsburg & East Liberty, OH returned to Fireside Lodge for their second time. Three days is what they had and they wasted no time catching 29 Northern Pike on t 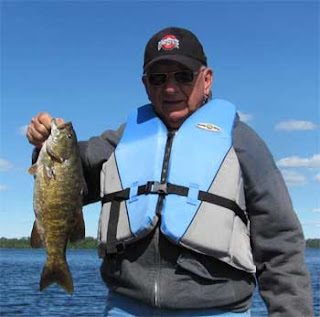 heir first. Second day had these two catching 18 Pike and some Smallmouth, with Chuck catching a Master Anglers Award Trophy Smallmouth Bass measuring 18-inches. Congratulations to Chuck. Third and final day (boy 3 days go by fast), they caught many Northern Pike and Skip had a fishing milestone as he landed his very first Musky. Great going Skip!! They both left saying they had a terrific stay with us at Fireside Lodge and took home some fond father and son memories.

Murray Meierhoff and Don Hilgers from St Louis and Rolla, MO were fishing at Fireside Lodge for their first time. First day was very short for fishing time as a rainstorm and cold front created tough fishing conditions. Next day was a good day as they caught Smallmouth Bass, Northern Pike and Murray broke the ice landing the first Muskie. Bigger Muskie, Northern Pike, & Smallmouth are why Murray and Don choose Fireside Lodge. They did well throughout their stay catching many Pike in the over 30” to 35” category and Murray ended up landing three Muskie with his largest being a fat 38-inches. They also had some good Smallmouth Fishing with Don landing an 18-inch Master Anglers Award Bass. Both had loads of fun and expressed they had a great stay with us at Fireside Lodge

The Meyer family consisting of three fathers and each if their two sons Marty, Jake, & Jordan / John, Nick, & Mick, / Bob, Jake, & Mitch returned to Fireside Lodge for their third time in four years. This family was here for a quick three days of fishing and they filled every minute out on the water. They caught a lot of fish and had loads of fun taking a break every day to have a long shore lunch and enjoy the Twin Falls area on Little Vermillion Lake. This gave the boys the opportunity to investigate what the forest has to offer, swim by the falls, and cook over an open fire giving them a total outdoor experience. They also celebrated Mitch’s birthday which was a big event. All had a lot of fun and made some special memories between fathers, sons, uncles, and nephews, which were simply priceless. Thanks for choosing Fireside Lodge for the third time to make some special family memories. 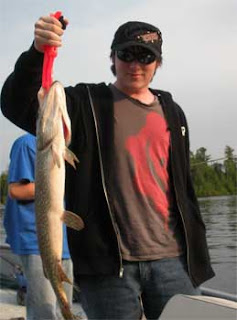 Father & Son David and Marc McFarland from Pendelton & Muncie, IN returned to Fireside Lodge for their eighth consecutive year. First day was cut short by heavy rain and a cold front, but not before David and Marc caught some nice Smallmouth & Northern Pike. When they came in to dry out Marc said that of the 1.5-inches of rain that fell 1-inch ended up in his boot. Instead of fighting it they took a long nap and stayed warm & dry. Second day these two caught 17 Smallmouth Bass & a 30” Pike. Third day was terrific as they combined for 42 total fish, 33 being Pike & 9 Smallmouth, with Mark catching two big 17.5” Smallies. Fourth day was 17 Smallmouth, fifth they caught 14 Smallies and 5 Pike, and their last day was finished with a bang catching a few Smallmouth and 40 Northern Pike. Both went home Happy & Sad, as another memorable fishing week came to an end, but they can already look forward to their return in 2011 as they made their reservations with us before leaving.

Ryan & Lisa Matthews from Winnipeg, Manitoba were at Fireside Lodge for their first time to enjoy their 10th anniversary. Enjoy is an understatement as Ryan and Lisa had a FABULOUS time staying with us at Fireside Lodge not only catching fish but taking in the whole package of wilderness, scenery, wildlife viewing and everything else a natural setting in the boreal forest wilderness provides. After having a bunch of nice size Pike following their lures they came to my tackle shop for advise on how to turn these follows into catches. After a good discussion on how fish attack other fish and presentation of different lures they purchased some Blue Fox Spinners and X-Raps, then they were on their way to apply their skills. Well, when they returned with big smiles on their faces I knew the results would be positive and they were as they caught a bunch of Pike having loads of fun doing so. Another success was their discovery of how to fish with leeches and how much Smallmouth love them. After some instruction and again the application of their skills, Ryan and Lisa had a ball catching these ever fighting bronze backs. These two were having so much fun that they decided to skip the traditional Canada Day, (July 1st) fireworks in Sioux Lookout to enjoy the wonderful natural sounds and scenery from their cabin deck as the fire flies gave them a very quiet and peaceful light show for this special Canadian Holiday. We thank Ryan & Lisa for choosing Fireside Lodge to enjoy their special milestone of marriage. 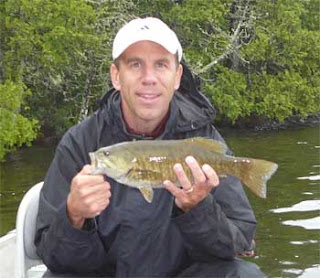 Make sure to go to our website listed below to see the 2010 Photos For Fabulous Video, Wildlife Events, and Current Happenings go to our Social Sites Below.