Weather was fabulous this week and the water levels are good. As for the fishing it was “FABULOUS”!

Dan Szkola from Sugar Grove, IL and best friend Dan Landbo from S. Elgin, IL returned for their th trip. On their DOA & first day they caught 41 Northern Pike, 10 Walleye 20-24”, 9 –Smallmouth Bass & 1 Musky. Great start. 2nd day was “FABULOUS” as they caught 106 Pike, 8 Smallmouth Bass with Dan catching 3 trophies at 18”, 18.75”, & 19.25, but the best fish of the day was a trophy Tiger Musky caught by Dan measuring 45.5” making a record fishing day for Dan. Monday was all about Smallmouth Bass, catching 60 most 15 to 17.5 with Dan getting another 18”er & Tuesday was all about Northern Pike landing 85, and losing a bunch while top-water fishing, and having a ball watching the Pike hit their lures about three feet in the air. Last day they finished strong catching 6 Smallmouth Bass, each catching a trophy 18”er, and 159 Northern Pike. As they left I took their traditional picture in front of the tackle shop as they made reservations for 2014.
10

Fly-Fishers Bill Rasbach, Charlie Walton, Kevin Zak, & Wayne Paskey from Ft Meyers, FL, Hudson, OH, Brookline, MA, & Coon Rapids, MN returned for Bill’s 10th year, Charlie’s 3rd,  & the first time for Kevin & Wayne.  First day was productive catching Smallmouth Bass with Bill & Kevin catching close to 30 & Bill landed a trophy 19”er. Another day had them Fly-Fishing for Northern Pike catching 75plus fish between 24 to 30-inches.  Being knowledgeable fly-fishers they were patience in hoping for the Smallmouth Bass to come up shallow where they would be more   Last day was blast catching many Smallmouth Bass on surface poppers. All left very pleased with Bill so sure of his return next year that he left his fly rods to avoid shipping charges.
accepting to poppers. Well they finally did & they caught bunch between 14-19”. You could tell by the smiles of success on their faces that the Smallies were hitting on the surface. On their second to last day they caught about 30 fish per boat, half Pike & Smallmouth & Kevin landed a Trophy Smallmouth measuring 19”. 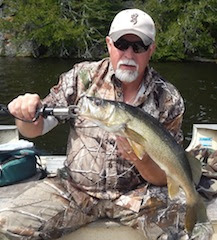 Larry Beard
Erwin, TN returned with nephew Jon from Virginia Beach, VA & good friends OC Templeton from Gate City, VA, Tony David from Big Stone Gap, VA, John Hook from Jonesborough, TN and father &   Within hours of arrival OC, & Tony caught their 1st Northern Pike ever.  And by the end of their first full day of fishing this entire group all caught their first Northern Pike ever plus 25-50 more. At the end of the day the total tally was 335, plus or minus, Northern Pike plus Larry & Jon caught a Trophy Smallmouth bass each and Tony & Wendel each caught their first ever Muskie. It was so on fire for a while that Tony caught 5 Pike on 5 casts with a Buzz Bait. During their 5 days stay they had another day of catching over 300 Northern Pike. John Hook took OC & Tony walleye fishing on separate days both with  6 of the fellows, having never been to Canada fishing before enjoyed the fishing and all that came with it like the wildlife, seeing Moose, Eagles and many other
animals a birds/waterfowl, had their first ever shore lunch, and realized the value of our remoteness at Fireside Lodge. All had a “FABULOUS” time and intend on returning sometime in the future.
fabulous results. One day they caught 25 Walleye all being between 20 to 28” & another day 26
were caught with a 6lber taking top billing. For two days 6 members of the group concentrated on Smallmouth Bass fishing catching well over 70 one day and over 80 on the other day. A lot of these were very big smallmouth and if fact the group accounted for 29 Master Angler Award Trophy Smallmouth Bass between 18-19.5”. Larry also caught the biggest Muskie or the trip at 37”.
sons John, Wendel, & Wesley Davidson from Dungannon & Lebanon, VA.

John & Mary Ann Lugibill from Columbus Grove, OH were referred to us by long time guest Bill st day they caught some Northern Pike and a great big Lake Trout.  All week these two did very well catching Northern Pike in the 27 to 34-inch range. One day John lost what he thought was a big fish just by the way the fish stayed down, shook it’s head and gave a very strong run. So him and Mary Ann returned to that spot on their last day. Before too long Mary Ann hooked into a good fish, which ended up being the big fish of the week. After a 10-minute battle Mary Ann perfectly led a 47” Tiger Muskie into the cradle, and John did a great job netting this monster of a fish. They also got a great assist from guests Jack & Pat Gangler as they were fishing in the area and helped take pictures & released this magnificent Trophy. Everyone in the dinning rom congratulated Mary Ann at suppertime for her once in a lifetime catch. John & Mary Ann left having a wonderful stay.
Aulenbach. 1

Pat & Jack Gangler from Aurora, IL who were on the spot to help John & Mary Ann above are long time guests from our first year. During their 5-day stay they caught a lot of Northern Pike & Smallmouh Bass. Jack and his son Pat have been on this traditional father & son Canadian fishing trip for over 25-years. They were breaking in their newly purchased boat, christening it with many fish throughout the week. Both enjoyed another stay with us at Fireside Lodge a hope to return.

Phil Spahr and his two sons Brad & Greg with their two sons, Phil’s grandsons Steven & st day Phil’s tenure showed through as the st trip, caught a Trophy 20” Smallmouth Bass. Next day was Muskie fishing & they did great landing 4, the largest being a 38” clear Muskie. They had two other great fishing days one catching 77 Northern Pike with a few Smallies and their last day they landed 49 Pike with 2 Smallmouth Bass. The week was full of fun and many lodge conversations about fishing, wildlife, and life itself. Special catches of the week were 12-year old Christopher & Steven landing Master Anglers Award Smallmouth Bass at 20, and 18-inches & the 38” Muskie by Grandpa Phil. In addition to all the great fishing, this three generations group enjoyed the wilderness we have, and being that it was Greg & Christopher’s first trip they were in awe of what was available in wildlife & birds in the area. All left with sadness that their long awaited trip was over but said it was time to plan for next year.  Hope to see them all again in 2014.
group caught 48 Northern Pile and 2 Smallmouth as Christopher, on his 1
Christopher were all back for Phil’s 15th fishing trip to Fireside Lodge. 1

& catching a bunch of Northern Pike and landing a few nice Muskie. A few of their best days had them catching over 150 and 70 Northern Pike. The other days they targeted larger fish, one day catching 30 pike over 30” with some smaller fish mixed in, & another day had them catching 24 between 30-39.5 inches. Rob caught the 39.5” Pike which was a brute. They also missed many fish and saw a lot of follows. Both said every year is different having new experiences, this being no exception, and they are already looking forward to what 2014 will bring.

Make sure to go to our website listed below to see some GREAT Fish Photos. For Fabulous Fishing Video, Wildlife Events, and Current Happenings go to our Social Sites Below.

Posted by Alan Brandys/Fireside Lodge at 4:45 AM